The Month to Make a Difference: Biodiversity Month

September is Biodiversity Month — a month to appreciate the extraordinary web of life we are part of and to encourage the protection, conservation and growth of biodiversity within Australia and worldwide. It also serves as a reminder to reduce the impact we have on the environment to ensure our biodiversity is preserved, both for our species themselves and so that future generations can appreciate them.

Conserving biodiversity: a plight for government, a concern for Australia

Biodiversity encompasses every living thing in existence on our planet and the ecosystems they comprise. The world’s ecosystems face numerous threats, most of which humanity is a catalyst for. But, like all species, humans depend on biodiversity. Essential food and water, and many medicines, minerals and industrial products, are sourced from natural environments, without which we could not survive. Tourism and recreational sectors are also reliant on ecosystem and species diversity.

Australia’s geographic isolation and high percentage of endemic species, many with an evolutionary lineage stretching to Gondwanan times, makes us one of the most biodiverse countries on Earth and one of just seventeen that is recognised as ‘megadiverse’. However, our rate of species endangerment and extinction, habitat loss and subsequent biodiversity loss has intensified since European settlement 233 years ago.

Despite being home to more than 600,000 species (of which four out of five are found nowhere else), over 100 native species have gone extinct and a further 1000 species are at risk of extinction – of those, at least one-third are critically endangered. 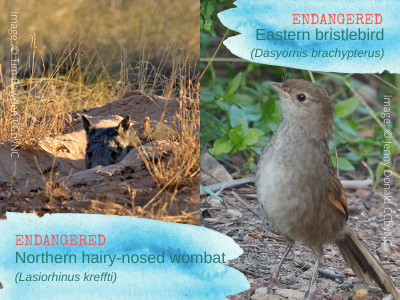 Major contributions to the decline of floral and faunal diversity in Australia are the introduction of invasive species (affecting 82% of Australia’s threatened species according to research conducted for the Threatened Species Hub) and ecosystem modification, alteration or loss (affecting some 74% of existing threatened species).

Ecosystems degraded or lost over the past 200 years include 75% of rainforests, nearly 90% of temperate woodlands, and more than 60% of coastal wetlands in southern and eastern Australia.

Queensland, in particular, is gifted with some of this continent’s most awe-inspiring natural wonders which remain under threat. The most renowned is the Great Barrier Reef, but other vulnerable biodiversity hotspots include the Scenic Rim, where subtropical rainforests, mountainous headlands and rocky outcrops support critically endangered or endangered species like the regent honeyeater (Anthochaera phrygia), black-tailed antechinus (Antechinus arktos) and eastern bristlebird (Dasyornis brachypterus). Parts of the Great Dividing Range, such as Epping Forest National Park, home to the last remaining wild population of the endangered northern hairy-nosed wombat (Lasiorhinus kreffti), also support endemic species that risk being lost within our lifetime if we do not work to conserve them.

Failure to act in time will result in more species extinction. Strategies must therefore be implemented, emerging methods of environmental conservation utilised, and, crucially, adequate funding allocated if Australia is to prioritise and protect its biodiversity.

In the spirit of Biodiversity Month, we urge Australians to get involved in conservation efforts.

You can protect and promote biodiversity in your local community by:

We all have a role to play in conserving Australia’s biodiversity, and, if we care to look carefully, biodiversity is all around us.