National Water Week, held every third week in October, is an annual event dedicated to building awareness of the value of water in Australia and aims to inspire individuals, communities and organisations to take action to help protect and conserve this precious resource.

The 2022 National Water Week theme ‘Our Water Stories’ invites us all to think more deeply about our relationship with water and share our water stories through past, present, and future lenses.

This National Water Week, we’re highlighting the importance of healthy waterways by reporting on a current and future threat to the health of the Dawson River in Central Queensland and the many species that inhabit it, including our iconic platypus.

Like other water-dependent animals, platypuses rely on the waterway in which they live for all their survival needs: finding food, avoiding predators, creating burrows and raising young. Changes to their foraging habitat, either affecting water quality or reducing their direct food source, can threaten platypus populations.

According to a study on the effect of water and sediment quality on platypus numbers (Serena and Pettigrove, 2005)[1], three factors are adversely related to platypus population status:

Chemical pollution in waterways can poison the platypus’s food supply and can lead to deoxygenation of water. The critically endangered white-throated snapping turtle and Fitzroy River turtle, which inhabit the upper Dawson, are also highly vulnerable to such chemical pollution.

Following successful lobbying by Lock the Gate and Wildlife Queensland Upper Dawson Branch (see previous story: 20 July 2021), the Federal Government ruled last year that Santos’ Proposed Action must be controlled and will require assessment under national environment law before it can proceed.

But a report by the Independent Expert Scientific Committee on Coal Seam Gas and Large Coal Mining Development (IESC), handed to the government in July this year, found that the release of untreated water could have ‘major impacts’ upon about 12 km of the Dawson River currently untouched by water releases, including directly and indirectly exposing aquatic wildlife to contaminants.

“The IESC considers that untreated produced CSG water should not be released into any surface waters, even during high flows, because of the risks of short- and long-term impacts of chemical contaminants on downstream aquatic, riparian and shallow subterranean ecosystems,” the report found.

Royal Melbourne Institute of Technology (RMIT) researchers, Lock the Gate and Wildlife Queensland Upper Dawson Branch are now calling on the Minister for the Environment and Water, the Hon. Tanya Plibersek MP, to refuse the Proposed Action on grounds of unacceptable impacts to threatened species and water resources.

In a joint letter to the Minister dated 2 September 2022, Matthew Currell, Professor of Environmental Engineering at RMIT University, stated that the Proposed Action is “likely to result in unacceptable impacts to the cultural and environmental values of the Wardingarri/Dawson River, including to matters of national environmental significance.”

“The untreated CSG water is documented to contain high concentrations of harmful contaminants, including ammonia, heavy metals, and organic chemicals[2]. The Office of Water Science[3] and the IESC have both raised significant concerns about this proposal,” said Professor Currell.

“The IESC also noted that stygofauna (organisms that live within subterranean aquifers below and adjacent to the river), are likely to be impacted by the scheme. Despite this, there have been no field surveys to determine baseline stygofauna presence or diversity,” he added.

“Our 2019 PlatypusWatch environmental DNA (eDNA) pilot study in the Dawson River detected platypus in two out of the four sites sampled. In 2021, as part of an ongoing program to protect platypuses in the region, we surveyed 19 sites along the Dawson River, from Moura to west of Taroom. Five sites were positive for platypus DNA in four areas,” said Ann.

The results, as shown in the maps at right, highlight the distribution of platypuses in the river system.

“We know platypuses are frequently seen in the Upper Dawson River at Baroondah Crossing and we have detected them using eDNA,” said PlatypusWatch project officer Tamielle Brunt.

“This site has favourable habitat features such as native riparian vegetation and stable banks for burrowing sites but a threat to their main food source will be detrimental.

“Water pollution can reduce the abundance and diversity of platypus food and if platypuses don’t have food to sustain themselves in this area, they will have to find it elsewhere. We are further restricting their inhabitable habitats and increasing their risk of travelling out of their protected home ranges in search of other suitable food sources and habitat. 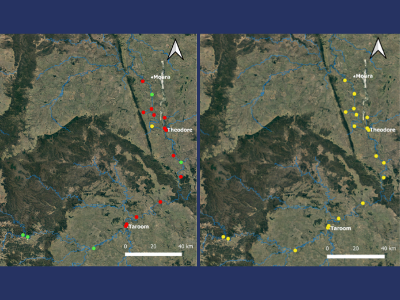 Five sites (green) were positive for platypus DNA in four areas, at Kianga River Road crossing, Isla-Delusion Road Crossing, Tarana Crossing and the Santos sites. One site was equivocal (yellow), meaning the test was not able to prove with certainty that platypus DNA was present.

“However, if resources are not abundant and favourable in other areas, platypuses will have to compete with other platypuses for food and they will struggle to sustain themselves in the Dawson,” Tamielle added.

“This is a highly important population in central Queensland as it is possibly the only link to our Western most population of platypuses at Carnarvon Gorge (specifically during flooding events). Any further contraction to these populations and connectivity to favourable habitats and food sources will be dire for future platypus populations in the regions.”

Find out more about the PlatypusWatch Upper Dawson Platypus eDNA Project and how you can get involved.

Professor Matthew Currell (RMIT) will be a guest speaker at the Wildlife Queensland Upper Dawson Branch Annual General Meeting (AGM) on 29 October 2022. For more information about the AGM, email upperdawson@wildlife.org.au

[1]Serena M and Pettigrove V (2005) Relationship of sediment toxicants and water quality to the distribution of platypus populations in urban streams. Journal of the North American Benthological Society 24, 679-689.