Quolls in the Mary
River Catchment

Seeking spotted-tailed and northern quolls on the Sunshine Coast

In 2019, Wildlife Queensland’s Quoll Seekers Network (QSN) was granted $33,540 from the state government’s Community Sustainability Action Grant program to continue their mission to find endangered quolls in the Mary River Catchment of Queensland’s Sunshine Coast Hinterland.
Records of both the spotted-tailed quoll (Dasyurus maculatus) and northern quoll (Dasyurus hallucatus) exist in the Mary River Catchment region from 30–35 years ago; however, no confirmed sightings of either type of quoll in the area were reported until a spotted-tailed quoll (possibly a vagrant) was seen on a council camera at Yaroomba in 2021.

Both quoll species are listed as nationally endangered under the Environment Protection and Biodiversity Conservation Act 1999.

‘We are not sure whether the local community has forgotten what these two carnivorous marsupials look like, or whether the Mary River Catchment community has only a limited understanding of just how rare both quoll species are.’

QSN needs to know whether both — or either — of these species remain living within the catchment. Community engagement through a series of face-to-face workshops, infrared camera monitoring surveys and conservation dog detection team surveys were combined with the production of a landholder guide to help local residents identify quolls and take action to address the key threatening processes that affect quolls. 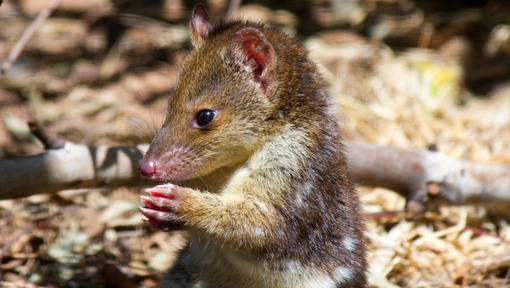 Have you seen a quoll? Residents who suspect they may have seen a quoll are asked to complete our Quoll Seekers Network form to log details of sightings in the Mary River Catchment region. 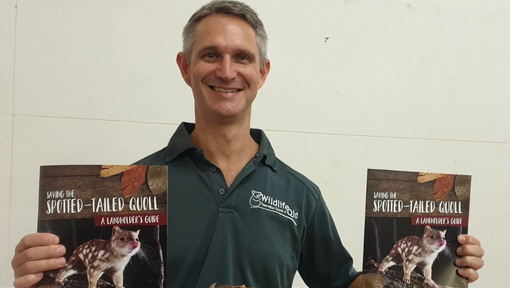 As part of the project, QSN ran Quoll Discovery Days within the Mary River Catchment region at Kenilworth and Pomona to allow community members the opportunity be able to come along and learn about quolls, their biology and appearance, and to watch a demonstration on how quoll detection dogs operate.

Expert presenters Dr Scott Burnett and Dr Sean FitzGibbon explained the ‘secret lives’ of these cryptic, endangered quolls and how locals could help support them across the Sunshine Coast and Hinterland and throughout the Mary River Catchment. Amanda Hancock, from Carnarvon Canines, and Romane Cristecu from the University of Sunshine Coast Detection Dogs for Conservation brought their clever canines and demonstrated the dogs’ scat-sniffing skills. 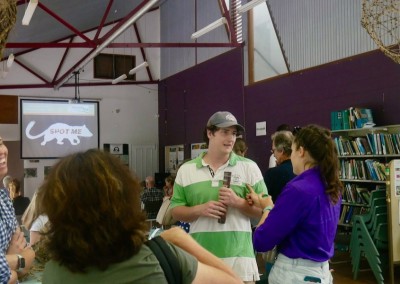 The turn out of local residents and wildlife lovers was encouraging, and several agreed to participate in camera studies and detection dog surveys. 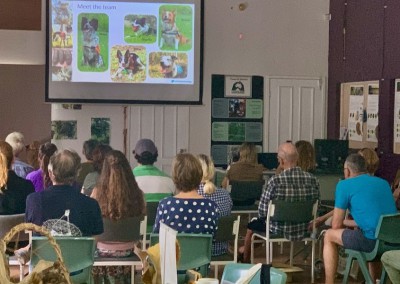 Romane Cristecu from USC Detection Dogs for Conservation explains why dogs are our best bet for finding quolls. 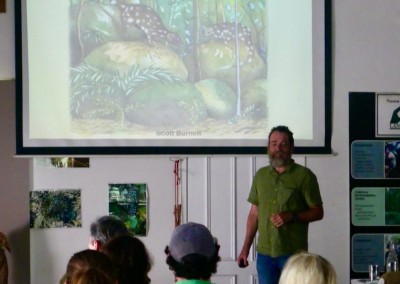 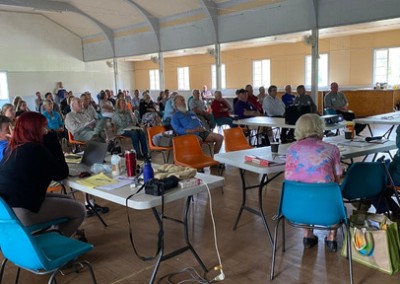 Eager quoll ‘questers’ turned up to learn all about these fascinating marsupial carnivores.

Wet weather at the start of the year postponed dog team surveys and monitoring and made the terrain difficult to access. Unfortunately, no quolls scats were detected by the dog teams across the properties surveyed. 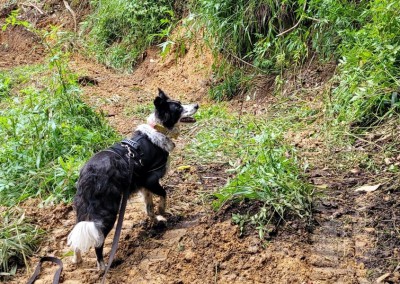 Austin ‘Danger Paws’ is on the case! Dogs have been shown to have a much better detection success rate than human wildlife spotters. 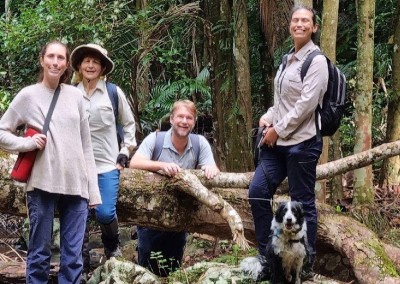 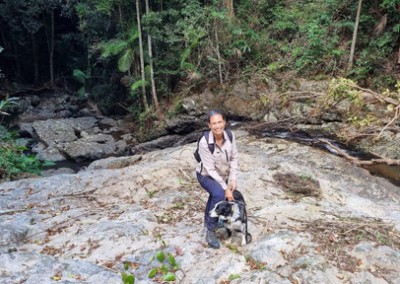 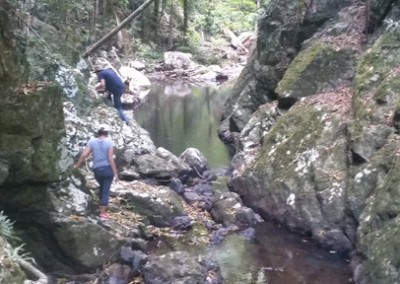 Steep terrain made it difficult to survey in the wet, but was beautiful nevertheless.

Despite the unsuccessful detection dog surveys, thirteen infrared wildlife monitoring cameras were then installed across five properties at Black Mountain, Pomona, Federal, Bella Creek and Bellthorpe in April and May.

The results of the camera surveys were carefully compiled by QSN’s invaluable team member Ivell Whyte. Find out what we saw by watching the video on this page or at Youtube.

The Quoll Seekers Network will continue to:

Using the scent detection dogs enables Wildlife Queensland to survey a wide area with a very high likelihood of detecting quolls if they have moved through the survey location at some time in the past.

A better understanding of where quoll populations still remain in South Eastern Queensland and especially within connected forests of the Mary Valley provides Wildlife Queensland with opportunities to discuss and implement conservation actions with relevant landholders, land managers and natural resource management groups.