Government Ensures a Good News Week for the Platypus

Wildlife Queensland’s PlatypusWatch Program goes from strength to strength with the collaboration and assistance of government at federal, state and local levels.

Wildlife Queensland is proud to announce that the PlatypusWatch program is a successful recipient of federal government Regional Bushfire Recovery for Multiregional Species and Strategic Projects funding. The overarching federal government program has made $750,000 available to seven platypus conservation programs to support bushfire recovery within regions destroyed by the 2019–2020 fires, including parts of Queensland’s south-east.

PlatypusWatch will use this funding to:

Environmental DNA is an innovative, non-invasive way of detecting the presence or absence of platypuses in a waterway by testing for traces of platypus DNA shed as these monotremes swim, move, feed and defaecate in the water. From just a few drops, lab technicians can detect genetic material unique to this aquatic mammal. 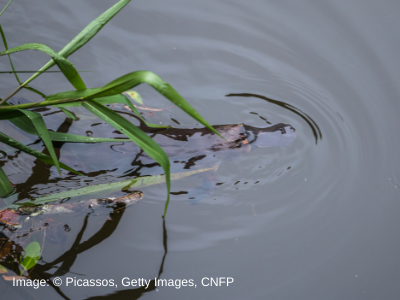 eDNA can sometimes turn up surprising results in waterways that appear to be less than ideal habitat for the species.

‘One of the great things about eDNA testing is that it synthesises very simple techniques for sample collecting with cutting-edge science and genetic analysis in the laboratory,’ explains Matt Cecil, Wildlife Queensland’s Project Manager. ‘With just a little training, just about anyone anywhere can take a water sample, so it is excellent for getting communities involved. Samples are then sent to EnivroDNA, where Josh Griffiths and his laboratory team do the high-tech work of analysing the sample and matching it to the platypus genome.’

Once the genetic data is analysed, the Platypus Watch projects team then works with Brisbane-based geospatial and statistical analysis consultancy BioGeo to collate data from sightings and eDNA detection and map out platypus distribution, gaining a better understanding of population dynamics for the species throughout Queensland.’

‘It’s inspiring to see government at all levels stepping up to fund projects and collaborate with Wildlife Queensland to create a brighter future for this monotreme. This grant funding allows us to focus on grass-roots, on-ground programs and really engage locals so we can counteract some of the issues that affect the platypus’s long-term survival,’ adds Cecil.

Building on Local Successes: Proof of Platypuses in Ipswich Waterways

At a local government level, PlatypusWatch has been working closely with Ipswich City Council on eDNA surveys and can now positively confirm that platypuses are inhabiting at least three Ipswich City sub-catchments.

‘It’s fantastic to find that platypuses occupy at least three locations within Ipswich City, and that the Council, under its Platypus Recovery Plan, is enthusiastic about improving environmental conditions for this monotreme,’ says Tamielle Brunt, PlatypusWatch’s Project Officer, whose team took 24 water samples from eight waterways with the Ipswich Local Government Area. ‘The next steps are to ensure the habitat is maintained for platypuses and degradation is kept to a minimum.’

Ipswich City Council Environment and Sustainability Chair, Councillor Russell Milligan has expressed support for active measures to improve water turbidity, bank stability, revegetation of riparian flora and weed management as part of Council’s Habitat Connections program. Efforts will now be ramped up, with Woogaroo Creek, one of the platypuses identified strongholds in the Ipswich LGA, set to receive significant stabilisation improvements from 2021 to 2023.

‘Whether using eDNA to get a better understanding of which waterways platypuses are inhabiting, educating citizen scientists and community members so they better understand platypus ecology and threats, or funding ongoing surveying and monitoring that can forecast potential declines in populations, all of these measures inform decision-making about platypus conservation within communities, local councils, state government and the nation at large,’ adds Brunt.

Nationwide, platypus habitat is estimated to have shrunk by some 22% over the past three decades, galvanising Wildlife Queensland’s efforts to lobby the Australian Government to list the platypus as a threatened species, providing it greater protection.

Although currently listed as Near Threatened on the IUCN Red List, the platypus is not listed under the Federal Environment Protection Biodiversity Conservation Act (1999) and is only considered of Special Least Concern under Queensland’s Nature Conservation (Wildlife) Regulation 2006.

How you can help

If you spot a platypus, report it with our easy-to-use form or contact platypus@wildlife.org.au. To learn more about our projects and get involved with citizen science surveys and activities that support platypus conservation, please join PlatypusWatch.