An amazing total of 24 butterfly species across the five main butterfly groups were observed by participants over the weekend and recorded on the Butterflies Australia app.

Guest presenter, highly respected amateur lepidopterist Cliff Meyer, shared his wealth of knowledge and experience throughout the days’ workshops and walks. He also recounted wonderful stories of how his fascination for butterflies as a young boy growing up in Far North Queensland developed into a lifelong passion, which has seen him discover and describe species, subspecies and the early stages and host plants of some of our lesser-known butterflies.

Participants were introduced to the five main butterfly families:

It quickly became apparent that Skippers are Cliff’s favourite! 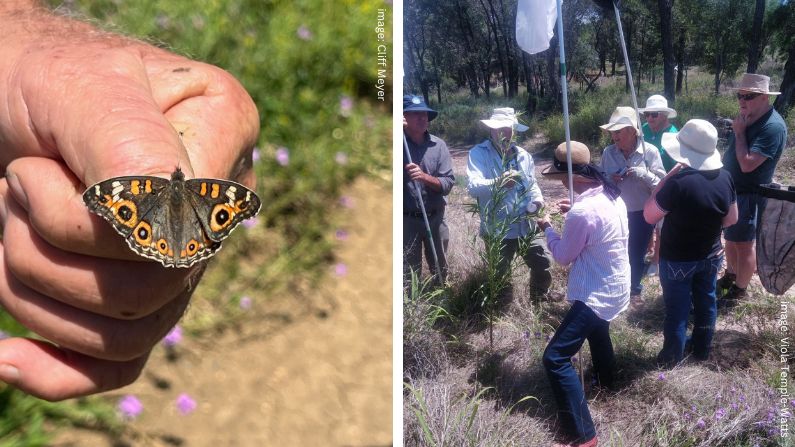 Understanding the families is a vital start to understanding butterflies, said Cliff, who shared his knowledge of how to identify species and spoke about the amazing life histories of many of our butterflies — the relationship that Blues have with specific species of ants is extraordinary!

Knowing that butterflies are at the bottom of the food chain, providing a food source for birds, reptiles and other insects, the Taroom group was thrilled to observe the mating of the Common Crow butterfly (Euploea corinna) as recorded by Cliff:

‘During the Taroom afternoon butterfly walk and talk activity on Saturday 15 October 2022, a male Common Crow was observed hovering about 100-150mm above a female Common Crow perched on a twig in the understorey with its wings facing downwards. Every now and again the male drifted closer to the perched female. This behaviour was observed to continue for about five minutes before the male suddenly dropped down onto the same twig that the female was perched on, extending his yellow brush-like hair pencils just prior to landing. Copulation between the male and female appeared to take place almost immediately as the coupled pair flew away shortly after when we disturbed them while trying to obtain a better photographic vantage point.’

The weather at Taroom was kinder than at Theodore, so the two walks and talks could go ahead as planned. Despite only one walk at Theodore, 14 species were also netted, identified, and released. A late afternoon side trip to the boggomoss on Glebe Weir Road, between Taroom and Theodore, yielded 16 species. 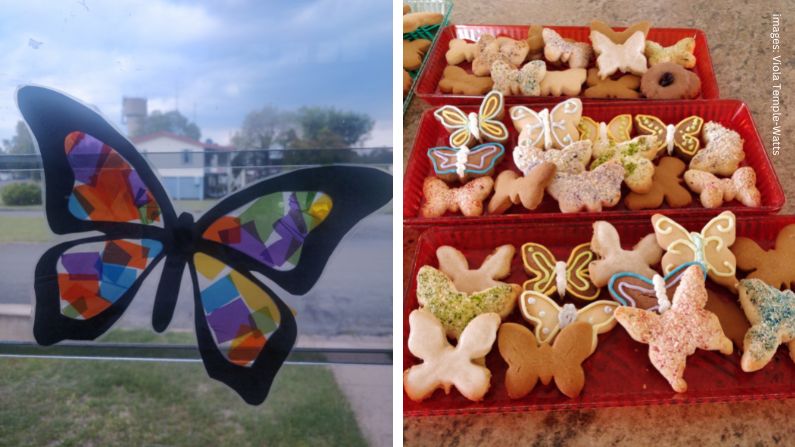 Members baked beautiful celebratory butterfly cakes and biscuits, and the Theodore community, young and old, entered into the spirit of the Butterfly Weekend by creating colourful butterfly artworks which were displayed in the hall.

For more information about Upper Dawson branch’s projects, activities and how you can get involved, please visit our branch webpage.