Today is International Women’s Day and 2022’s theme is #breakthebias. This year, as a way to do that, we’ve decided to keep it light and ‘reclaim’ two words sometimes used to describe women in minimising ways – bird and chick.

Here at Wildlife Queensland, we know that Aussie birds and their chicks are beautiful, clever, resourceful, resilient and fascinating – just like our staff members. Who wouldn’t want to be associated with that? So, today, we’re turning these terms on their head and giving a shout out to some of Australia’s amazing birds and also to some of Wildlife Queensland’s incredible female volunteers and staff.

Australia is home to some of the Earth’s most unique and flamboyant avifauna. Once recorded as ‘The Land of Parrots’ on maps of the world, we boast some 56 parrot species, only 5 of which are found elsewhere. Among the Psittaformes are the astonishing eclectus parrot (Eclectus roratus) of north Queensland, one of the few bird species in which the female is much more glamorously attired than the male. Also of note are the critically endangered migratory orange-bellied parrot (Neophema chrysogaster) and the endangered night parrot (Pezoporus occidentalis), with its fascinating Lazarus-like story of resilience and recovery. 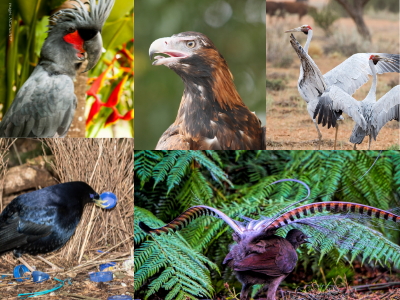 But it isn’t just the parrots that add panache to our continent. We are also home to two stately ballerinas of the bird world, the elegant brolga (Antigone rubicunda) and saurus crane (Antigone Antigone). Matching them in rhythm is the ruddy-cheeked palm cockatoo (Probosciger aterrimus) whose claim to fame is being the only species other than humans to understand and use musical beats.

Outperforming our cranes in size are the southern cassowary (Casuarius casuarius) and the emu (Dromaius novaehollandiae). For flightless, ground-dwelling ratites, these species still ‘rule the roost’ and put the males to work raising their chicks. Like their larger relatives, our diminutive endangered emu-wrens and eastern bristlebird (Dasyornis brachypterus) continue to put up a good fight, showing that size doesn’t matter — and nor does colour. Our endemic black swan (Cygnus atratus) was considered a marvel of the natural history world when first seen by Europeans; so astonishing was it that it now even has a theory named after it! Another of Australia’s most famous birds, the budgerigar (although not as often smuggled as you might think!) also chirps up for diversity. In the wild, budgies wear only the camouflage colours of green and yellow, but in captivity, this species has been bred to have an astonishing assortment of colours and is among the most popular pets in the world.

When it comes to smarts, consider the black-breasted buzzard (Hamirostra melanosternon), a tool-user that picks up rocks with its beak and throws them to crack open emu eggs. Crows and ravens are also canny Corvids who employ twigs and sticks to help prise insects out of trees and bark. And then there are the engineers …  Incredible builders abound, from stage-building hoarders like the satin bowerbird (Ptilonorhynchus violaceus) and gerygones with their amazing dangling nests, to the mud-nest building apostlebirds and fairy martins, and the majestic ospreys, sea-eagles and wedge-tailed eagles high in their eyries.

Whether natural chanteuses like our magpies, whistlers, and honeyeaters; seasoned mimics like the superb lyrebird (Menura novaehollandiae); or the comedians of the bird world like the clownish galahs and cackling kookaburras, Aussie birds truly hold their own on the world stage.

Given all that, perhaps the words bird and chick aren’t so terrible after all. As loaded as language has become in the 21st-century, maybe these terms convey upon Australian women just a hint of the colour, character, and diversity of some of our native species.

Earlier in the year, we showcased several of our brainy, beautiful, dedicated, and downright wonderful ‘women in wildlife’ for the International Day of Women and Girls in Science. If you haven’t already, please check out our video to see what they had to say, and, if you’d like to support this reclamation, please share a shot of your favourite Australian bird on our Facebook or social media pages today.

With humour, compassion, and curiosity about the natural world, we can #breakthebias and give all women and girls (or birds and chicks, if you prefer) the wings they need to rise up and soar. If you’d like to join the Wildlife Queensland team, please sign up as a member of your local branch.