A win for Sunshine Coast fauna

Sunshine Coast wildlife is the winner in the recent announcement that Yurol Ringtail State Forest will be revegetated and become part of Tewantin National Park.

On Tuesday, Environment Minister Scanlon announced that over 2400 ha of former state forest and HQPlantation forest is to be protected and incorporated into Tewantin National Park. The action will double the park’s size and establish a much-needed wildlife corridor to the Cooloola section of Great Sandy National Park.

Working collaboratively, the Kabi Kabi People Aboriginal Corporation, Greenfleet Australia and Noosa and District Landcare Group (NDLG) will be tasked with revegetating native flora in the former plantation forest —  especially koala-specific eucalypts to encourage these iconic but endangered marsupials to take up residence.

A Queensland University of Technology team has been conducting state-of-the-art thermal drone surveys to record koala numbers in the park, which will operate as a baseline, but it’s not only koalas that will benefit. Replanting native eucalypt species should, over time, also increase the number of crucially needed food and shelter trees for the Sunshine Coast’s hollow-dependent arboreal marsupials, such as quolls, greater gliders and yellow-bellied gliders.

‘So many species depend on us setting aside habitat for wildlife along Queensland’s heavily populated coasts and hinterland,’ said Matt Cecil, Wildlife Queensland’s Project Manager. ‘We’ve been working closely with Noosa Landcare for some time now, helping survey sites across the Sunshine Coast, using traditional surveys, spotlighting, and conservation dog detection teams – such as Nicky Wright and the super-sensitive nose of her dog, Ada, who sniffs out the scats of threatened greater gliders.’

Quolls have remained predictably difficult to find on the Sunshine Coast, but the 2021 photographic evidence of a spotted-tailed quoll at Yaroomba, near Coolum, continues to give Wildlife Queensland’s Quoll Seekers Network hope. 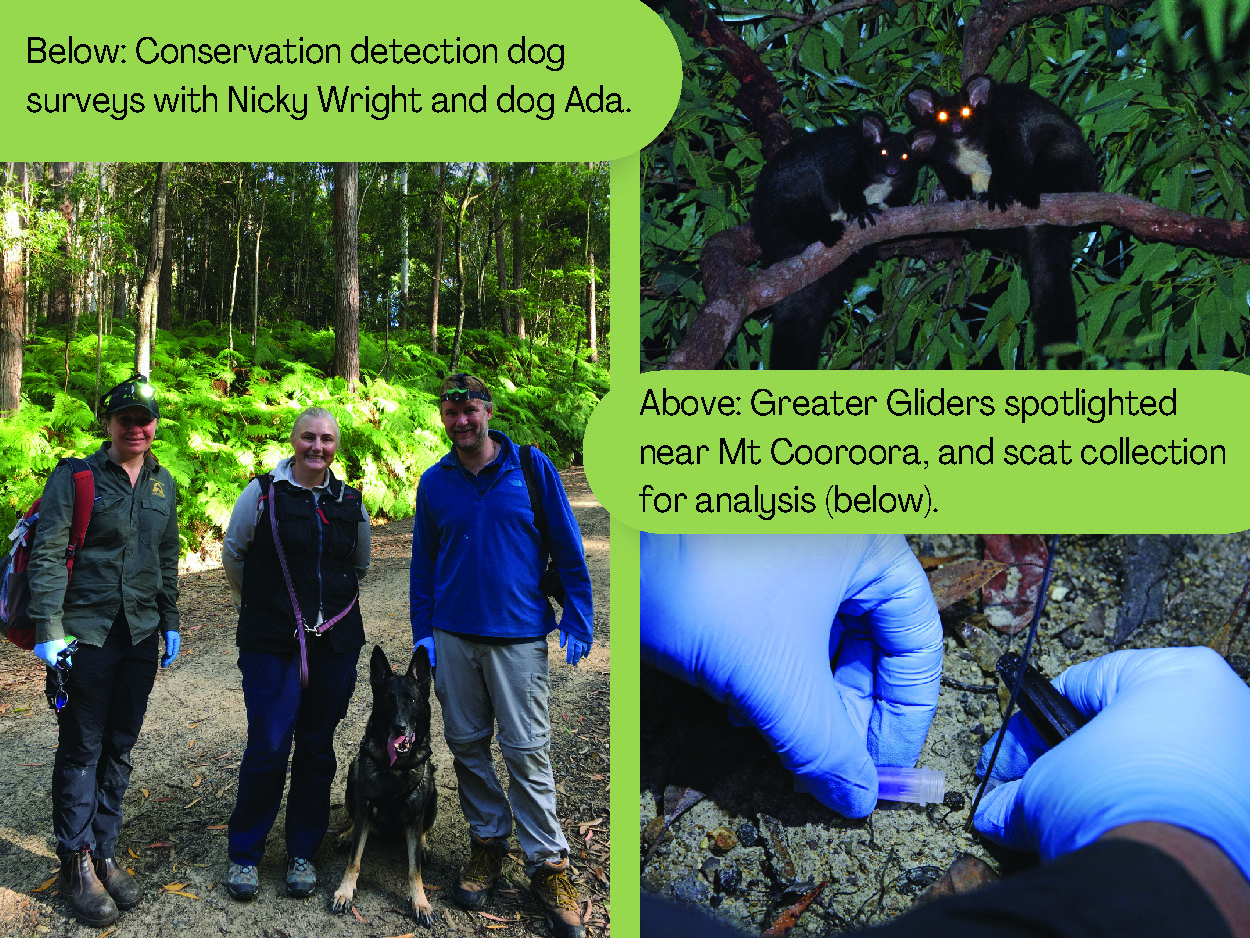 ‘Recent surveys conducted by NDLG with the assistance of Queensland Glider Network Project Officers also identified sites within Yurol Ringtail State Forest as important habitat for the endangered greater glider,’ added Matt, ‘so it’s great to see another initiative Noosa Landcare has been working so hard on has finally paid off and will benefit these gliders.’

Another threatened species that inhabits the area is the Richmond birdwing butterfly. Noosa and District Landcare Group and Wildlife Queensland’s Richmond Birdwing Conservation Network have been steadily increasing the number of birdwing caterpillar vines (Pararistolochia praevenosa) planted for this vulnerable butterfly.

Phil Moran, Noosa and District Landcare Group’s General Manager, said, ‘We’re extremely proud to be involved in this fantastic Yurol Ringtail Project, which began in 2018. Our group was formed in 1990 in part due to local people’s objection to a monoculture of exotic pine and Gympie messmate plantations. This has now come full circle, so we’re looking forward to recreating a diverse ecosystem that all fauna can occupy and enjoy.

The initiative also benefits local residents, generating sustainable, rewarding jobs in the region and engaging the Kabi Kabi Indigenous people in gaining practical experience Working on Country. Additionally, Greenfleet’s role will sequester hundreds of thousands of tonnes of carbon emissions, helping offset some of the forecasted risks of climate change.

‘Full credit to the team at Noosa and District Landcare and their project partners for making this happen,’ said Des Boyland, Wildlife Queensland’s Policies and Campaigns Manager. ‘Wildlife Queensland has been demanding that the State Government rapidly increase the Protected Area Estate to reach the promised 17% for some time now, understanding that if the Beattie Labor Government’s former promise was honoured, all state forest would be national park by 2024.’

Boyland added, ‘It’s also important that the Environment Minister and the Queensland Premier acknowledge that the operative word in the term “Protected Area Estate” is protected. They have an obligation to ensure that national parks, new or old, are foremost for wildlife and that the wants of tourists don’t override the needs of flora and fauna in protected areas, as has happened at Cooloola.’

It is a plan Wildlife Queensland would also welcome. ‘A Coolum to Cooloola wild corridor safeguarding a broad sweep of coastline along one of Queensland’s most-visited tourism regions could send the message that our wild places are no longer for sale,’ said Boyland. ‘Doubling the size of Tewantin National Park is an admirable start, but the future of the koala, Richmond birdwing butterfly, greater glider, yellow-bellied glider and spotted-tailed quoll – if indeed the latter still has a future on the Sunshine Coast – depends on many more such additions to Queensland’s Protected Area Estate.’