The 2019 Wildlife Queensland Annual Dinner was a resounding success thanks to our many generous sponsors, members and supporters.

The event was held at the Indooroopilly Golf Club on 7 December and attracted 110 people.

The evening’s after dinner special guest speaker, renowned palaeontologist Professor Mike Archer* from the University of New South Wales who has led research into the Riversleigh fossil deposits since 1976, gave a fascinating presentation to attendees on how the fossil record has vital information about saving critically endangered species from climate change, and his current project to save the Critically Endangered Mountain Pygmy-possum.

Palaeoconservation: Learning from the past, to understand the present, to better conserve the future

Professor Archer contends that traditional approaches to conserving our biota, while vitally important, are insufficient to slow the rate of extinction of endangered species, and that we have a moral responsibility to explore all non-traditional strategies that might help to slow the looming cascade of extinctions.

Because 99% of the life span of species exists in their past, one of these strategies should be to seek information from the fossil record about potential resilience to adapt to a wider range of habitats than those in which species are now struggling to survive, says Archer.

“In some cases, such as the Critically Endangered Mountain Pygmy-possum, this search for wisdom about resilience has extended back millions of years to discover that they are now just hanging on in a climate-change-threatened environment that is far from optimum for their lineage.”

The Mountain Pygmy-possum (Burramys parvus) – Australia’s only hibernating marsupial and one of the species most vulnerable to climate change in Australia – needs temperatures to hover just above freezing to hibernate successfully. The tiny mammal lives in alpine regions but less than 2,500 remain in the wild, according to estimates, with winter snowfall declines and warmer weather threatening extinction.

To date, we’ve approached conservation challenges as if they were 3-dimensional problems. What’s needed is a 4-dimensional approach, says Archer.

There are four things we need to be addressing:

Fossil clues may save endangered marsupial 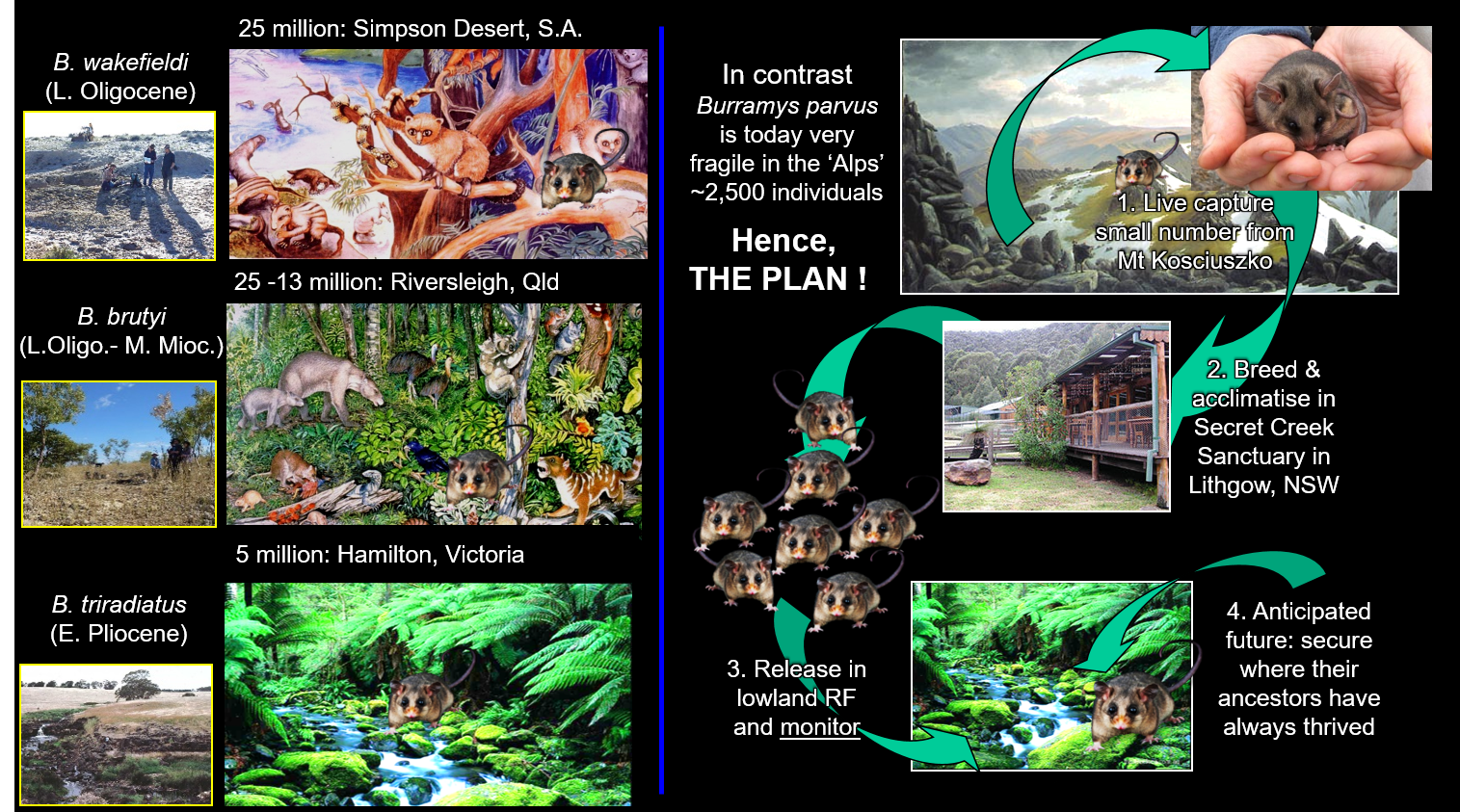 Exploring the unrealised adaptive resilience of endangered native species is key to Professor Archer’s current project to save the Critically Endangered Mountain Pygmy-possum (the Burramys Project).

Based on an analysis of fossils dating back 25 million years, Archer noted that this marsupial’s ancestors have always lived in temperate, lowland wet forests rather than the cold alpine zone where they are just managing to hang on today.

“This discovery led to our proposal for a conservation translocation,” he says.

Archer’s team has proposed an innovative conservation program that would involve retrieving a small number from the threatened population on Mount Kosciusko, breeding them up and acclimatising them in Secret Creek Sanctuary in Lithgow, and ultimately trial releasing and monitoring surplus individuals back into lowland wet forest habitats where it is anticipated they will readily establish thriving, secure populations.

“Ecophysiology and captive breeding provide additional evidence that establishing a colony of these possums in lowland, wet forest habitats should give them the greatest chance for survival into the future.”

For more information about the Burramys Project, refer to recently published research in the journal Philosophical Transactions B**.

Optimising biodiversity into the future

We need to protect our platypus populations! © Mike Archer

Other species in Australia and around the world could benefit from this ‘four-dimensional’ perspective, says Archer. One such example is Australia’s elusive platypus.

Whilst land clearing and bushfires have had a devastating effect on Australia’s koala populations, the fossil record shows that they are in fact more abundant today than they have ever been in the past. Hence this record does not suggest they are endangered although there have been regional declines. The same cannot be said of Australia’s platypus whose long term fossil record indicates that this lineage of mammals has been in long-term decline for more than 60 million years and is now far more likely than the koala to be threatened with extinction, says Archer.

Professor Archer praised Wildlife Queensland’s efforts to develop effective strategies for conserving the biodiversity of native species in Australia, in particular, the Society’s dedicated Platypuswatch Network which investigates and documents occurrences of platypus populations to identify where conservation actions are needed.

What we urgently need now are open-minds, acceptance of past failures, and commitment to do whatever it takes, however seemingly ‘unorthodox’, to better manage this crisis, concluded Archer.

How you can get involved

If you would like to volunteer to help on the Burramys Project, please contact Professor Archer at m.archer@unsw.edu.au.

Professor Archer and his team are hoping to raise more funding for the Mountain Pygmy-possum translocation project and expect to have a proper breeding facility built by mid-2020. The team has already raised $150,000 to construct the breeding facility but they need additional funding to purchase closed-circuit TVs to monitor these possums in their individual enclosures.

If you would like to donate to the project, please email Mike Archer at m.archer@unsw.edu.au.

Volunteer for a Riversleigh fossil expedition

If you would like to attend a future Riversleigh fossil field trip, please email Mike Archer at m.archer@unsw.edu.au about that as well.

The Holly Bryant Award is granted annually to a previous year Wildlife Queensland placement student in recognition of their contributions.

And the winner is …

Jasmin’s specific project aimed to develop a selection-criteria to guide the prioritisation of new sites for nest box programs in urban bushland reserves. In order to reach her conclusions, it was necessary for Jasmin to identify the main environmental factors that may potentially influence nest box occupancy of native arboreal marsupials. This was achieved through:

Jasmin delivered the project outcomes to a high standard and continued to volunteer her time leading spotlight surveys beyond her placement.

Congratulations, Jasmin and thank you for your hard work, dedication, generosity and professionalism.

Thank you to our sponsors

Wildlife Queensland would like to sincerely thank the following sponsors for their generosity:

* Mike Archer is Professor of Palaeobiology at the PANGEA Research Centre, University of New South Wales. More information about Professor Archer can be found here.