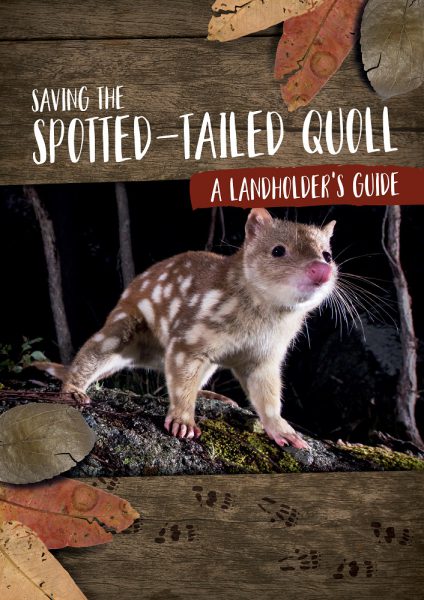 Wildlife Queensland has today launched a new guide that provides information and advice to landholders, natural resource managers and the public about the endangered spotted-tailed quoll.

The guide aims to provide practical ideas that may contribute to saving this elusive species.

“It seems fitting that this guide is being launched on World Habitat Day; the loss of spotted-tailed quoll habitat is a critical factor in the ongoing decline of this species,” says Wildlife Queensland Projects Manager Matt Cecil.

“Taking time today to highlight and reflect on just how important conserving, improving and connecting wildlife habitat is may help to inspire people to do what they can for native Australian wildlife.”

Key threats to the spotted-tailed quoll

The spotted-tailed quoll is the largest marsupial carnivore on mainland Australia and the second largest in the world. It is also the only quoll species found in south-eastern Queensland.

Habitat loss and modification, habitat fragmentation, competition and predation from introduced predators, road mortality, destruction of shelter sites, and bushfires have contributed to a significant decline in spotted-tailed quoll numbers.

Quolls are forest-dependent. They rely on mature or old-growth forests with plenty of tree hollows, logs, canopy cover and complex vegetation. Since European settlement, clearing for development and agriculture has reduced quoll habitats and contributed to a massive 50 to 90 per cent decline in populations.

In south-eastern Queensland, clearing has removed over 70 per cent of the forests and woodlands in the former range of the spotted-tailed quoll.

Fewer than 10,000 spotted-tailed quolls are estimated to now remain in the wild.

As a result, the spotted-tailed quoll is listed as a threatened species in all areas it inhabits across the country.

Unfortunately, there are no signs of the key threatening processes abating, says Cecil.

“We cannot rely on governments alone to save this species. Sadly, the spotted-tail quoll needs all the help it can get to halt a widespread population decline. Often the key threatening processes that cause species decline can be too large for individuals to stop. However, collectively, there are ways we can contribute.

“Saving the Spotted-Tailed Quoll: A Landholder’s Guide aims to provide people with some practical ideas that can be implemented across the landscape and which could collectively help this amazing native carnivorous marsupial to hang around a lot longer.”

A huge challenge for threatened species conservation is understanding exactly where the target species still survives, says Cecil. This is certainly the case for quolls which are naturally timid, secretive and difficult to detect.

“Spotted-tailed quolls are so shy and so infrequently seen in Queensland that it is difficult for researchers and conservationists to estimate how many individuals remain. In many parts of their former range, no sightings have been reported for years.”

A key way people can help is by reporting sightings of spotted-tailed quolls in Queensland to our Quoll Seekers Network.

“We need to get this elusive native marsupial in the forefront of people’s minds. The spotted-tailed quoll is little known within the wider community and we risk their silent disappearance if don’t work together to implement conservation measures aimed at helping this endangered species,” says Cecil.

“We hope this guide inspires the community to watch out for quolls and report any sightings. More importantly, we hope it helps landholders and natural resource managers to manage vegetation and agricultural production in ways that will enhance biodiversity and help secure a future for these feisty endangered marsupials.”

Saving the Spotted-Tailed Quoll: A Landholder’s Guide is available to view as a flipbook on our QSN page and can also be downloaded as a PDF document.

Report spotted-tailed quoll sightings to QSN at quoll@wildlife.org.au or via our online Quoll Sighting Form.