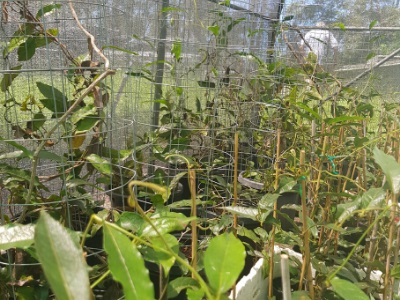 Growing nicely! Some of the birdwing butterfly vines donated by the RBCN to assist the captive breeding program at David Fleay Wildlife Park. Image: Wildlife Queensland

The breeding program, part of a joint captive rearing and release project conducted by the Department of Environment and Science (DES) and supported by the RBCN, aims to strengthen the genetic makeup of Richmond birdwing butterfly populations across their Queensland range.

With a wingspan of up to 16cm in females and 13cm in males, the Richmond birdwing butterfly is one of Australia’s largest butterflies. Unfortunately, due to habitat loss and fragmentation and introduced Dutchman’s pipe (which is toxic to the larvae of the Richmond birdwing), they are listed as a vulnerable species in Queensland.

To successfully breed the species, the butterflies need access to large amounts of healthy birdwing butterfly vines. This vine is one of only two larval host plants; the butterfly’s life cycle cannot be completed without the vine.

The RBCN recognises the importance of this captive breeding program and in December 2019 donated 60 vines to assist with the program in 2020 and beyond.

We hope these vines will grow to feed hundreds of Richmond birdwing larvae and contribute to saving this incredible butterfly.

Find out more about the RBCN’s work and how you can get involved.