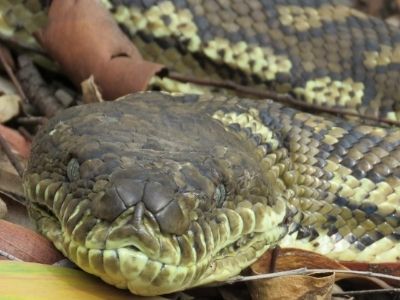 Snakes are undoubtedly the most fascinating of our vertebrate animals. Whilst only a very small percentage of people look at snakes with affection, everyone has a story, myth or opinion on them. People are amazed by snakes, whether because of their connections to the biblical serpents, their unique lifestyle or that some species can kill with deadly poisons.

Snakes are a great conversation starter. It is unfortunate that most of these conversations are not based on fact. Many popular stories about snakes are so far from the truth it is hard to credit that anyone can believe them.

In Australia, we have numerous large and/or potentially deadly snakes, which fuels people’s fear of them and leads to many harmless snakes and even lizards being killed. Most people in Australia have a snake in their yard at some time, and many snakes are permanent residents that have shared our yards with us for many years. It is only when people actually see them that they are aware of their existence.

Snakes are rarely aggressive and prefer to slip away rather than confront something as large as a human. They can also be an asset around the home. Many snakes eat rodents and other pests.

The following snakes are found in the bayside area of Brisbane, Queensland.

These are not considered a threat to humans:

These can be dangerous and should be avoided:

All snakes are protected. There is seldom a justifiable reason to kill one.

Potentially dangerous snakes can be relocated by trained snake handlers. Untrained persons should never attempt to relocate or kill them. Around 90 per cent of people bitten by snakes are attempting to catch or kill them. Give snakes room and there should be no conflict.

If you need assistance with a snake, call the National Parks and Wildlife Service or the conservation section of your local council.

You can also download and print this information as a handy leaflet here.