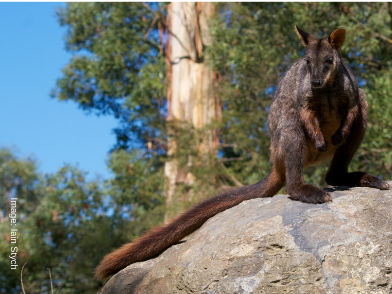 The Hon Sussan Ley MP, Minister for the Environment, announced the successful recipients on 3 April 2022, and the complete list of successful applicants can be viewed here.

The $198,375 sum allocated to Wildlife Queensland will be a major boon for brush-tailed rock-wallabies, which our team has already been supporting using member donations from our 2018 Christmas appeal. More recently, our part-time Project Officer Hannah Thomas has also been working with local landholders and the Logan City Council, setting infrared wildlife cameras to survey for the species around Mount Perry.

This much-needed funding for ‘brushies’ renews and enhances our ability to help save this species, allowing Wildlife Queensland to:

Hopping close to the edge

Brush-tailed rock-wallaby populations have contracted considerably over the past few decades, mostly due to the combined threats of habitat loss and land modification, predation by invasive species, natural disasters, and climate change.

The bushfires of 2019–2020 had a devastating outcome, destroying some 80 per cent of the species’ habitat in New South Wales and reducing populations in Queensland around Toowoomba and the Scenic Rim.

‘We’re thrilled that these funds will help us secure brush-tailed rock-wallaby populations in the northern part of their range and prevent further range contraction. Best of all, this will generate ongoing benefits for brushies, long after the lifetime of the project, through the establishment of the Queensland BTRW Conservation Network and the production of landholder revegetation guides. We can’t wait to get started.’

Once the project is in full swing, Wildlife Queensland will no doubt be seeking additional volunteers keen to help with weed removal and revegetation projects, and we look forward to welcoming all ‘wallaby watchers’ to the new network. Those who haven’t already are urged to please sign up for our free e-news bulletin to be alerted to all news related to brush-tailed rock-wallabies.

Wildlife Queensland would like to thank the Department of Agriculture, Water and the Environment for recognising the need for increased funding for priority threatened species such as the brush-tailed rock-wallaby.