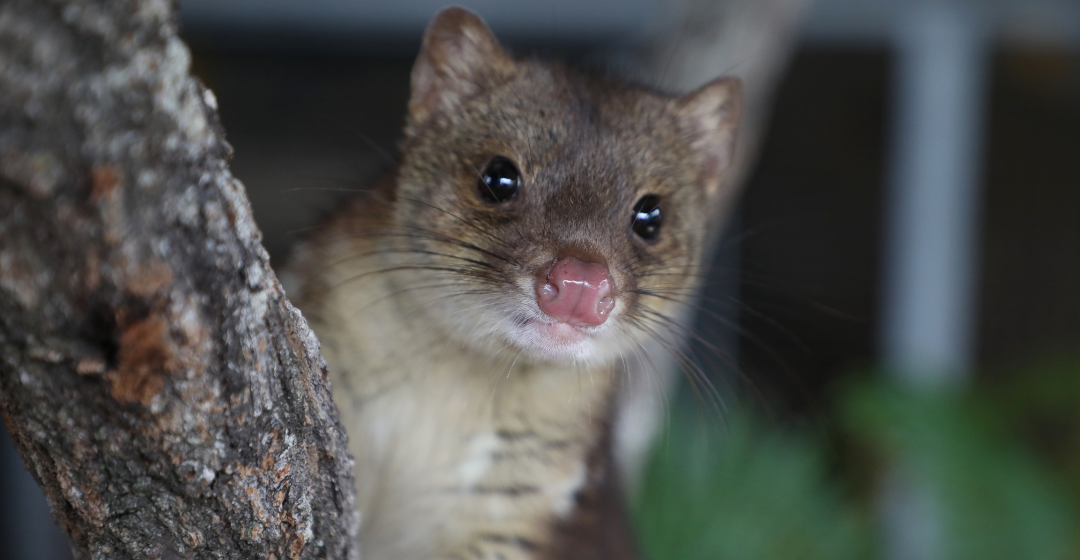 What’s spotted, strong, secretive and so hard to find that even Wildlife Queensland’s dedicated project officers struggle to find one out in the wild? The elusive spotted-tailed quoll (Dasyurus maculatus) – Australia’s marsupial answer to a big ‘cat’.

Luckily, this Threatened Species Day on 7 September, you don’t have to go prowling around the undergrowth or searching through hours of wildlife camera footage, like Wildlife Queensland’s Quoll Seekers Network researchers do, to see one of these special carnivorous marsupials. Simply stop in at Bundaberg Regional Council’s Alexandra Park Zoo to meet one for yourself – a handsome, four-year-old male spotted-tailed quoll named Crunchy.

Spotted-tailed quolls were once widely distributed, but their numbers plummeted following European colonisation. They are now extremely rare and desperately endangered. Only five small, isolated population strongholds are known to exist in Queensland, none of them north of Greater Brisbane. Crunchy, the zoo’s four-year-old spotted-tailed quoll was raised in captivity at Devils@Cradle, a Tasmanian wildlife park engaged in conserving carnivorous marsupials like the Tasmanian devil and quolls, which belong to a larger group of carnivorous marsupials known as dasyurids.While finding and conserving wild-living populations of these endangered quolls is the Quoll Seekers Network’s mission, individuals like Crunchy are also important for preserving the genetic diversity of the species and providing insurance populations in the event of localised wild extinctions.

“Unfortunately, Crunchy’s wild relatives have proven frustratingly difficult to locate across the northern parts of their former range, so learning more about these amazing carnivores is crucial, especially in parts of Queensland where we’re concerned this species may be on the very brink of vanishing forever – if it hasn’t already.”

To help landholders and locals identify quolls and learn more about the things they can do to save them, Bundaberg Regional Council has been making copies of Wildlife Queensland’s Quoll Seekers Network publication A Landholder’s Guide to the Spotted-tailed Quoll available to zoo visitors.

“In the historical literature, there are more than 30 references to plagues of quolls – can you imagine being overrun by these fierce little critters?” adds Revie. But Quoll Seekers Network’s recent 2021 forays into the Sunshine Coast Hinterland with quoll conservation detection dogs and wildlife-monitoring cameras failed to turn up any trace of the species, which is worrying.

“That’s why we’re thrilled to be able to share digital versions of our guide with people who go along to see Crunchy,” adds Revie. “We need landholders across that region to keep an eye out for quolls – not just on Threatened Species Day but all year long – and to report any sightings to us at Quoll Seekers Network, using our online sighting form.”

Anecdotal reports still suggest that a low-density population may exist south of the Bundaberg Regional Council region, in the Sunshine Coast and Gympie Local Government Areas, centred on some of the larger national parks and state forests there.

Over 8000 nights of camera studies, QSN hopes to finally spot the elusive ‘spotties’ ranging wild and free in parts of:

With all the footage collected for the projects, QSN is also asking for community volunteers to help with online analysis of camera-trap images and will be running two Quoll Discovery Days to explain how people can help quolls.

With luck, the two-year ongoing project will reveal that Crunchy’s wild brethren are still haunting the forests south of Bundaberg and Gympie. And who knows, maybe visiting Crunchy at Alexandra Park Zoo will inspire citizens in the Bundaberg Regional Council area to also ‘check their chook pens’ and report any sightings, too.

In the meantime, Crunchy can be visited for free from 9:30 am to 4:30 pm Wednesday through Sunday at Bundaberg Regional Council’s Alexandra Park Zoo, where he is a charismatic ambassador for the survival of his enigmatic species.