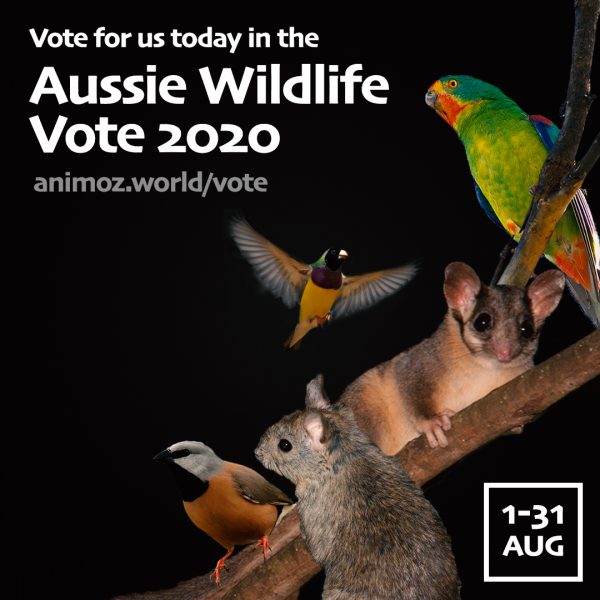 The Wildlife Preservation Society of Queensland has listed the Richmond birdwing butterfly in a public vote to highlight the plight of our unique native species.

The Wildlife Preservation Society of Queensland (Wildlife Queensland) along with more than two dozen other conservation organisations, will take part in an online public vote that brings attention to some of our most endangered animals.

The ANiMOZ Aussie Wildlife Vote 2020 is run by ANiMOZ – a trading card game created in Australia to engage people with the country’s unique native fauna.

The aim of the vote is to raise the profile of lesser-known animals that are just as in need of help as their more well-known counterparts, as well as to direct attention to the organisations working to save them.

Wildlife Queensland works with the Richmond birdwing butterfly through its dedicated Richmond Birdwing Conservation Network (RBCN) and is excited to be involved in the vote.

“The Richmond birdwing butterfly is one of Australia’s largest and most beautiful butterflies. Unfortunately, due to habitat loss and fragmentation and introduced Dutchman’s pipe, which is toxic to the larvae of the Richmond birdwing, they are listed as a vulnerable species in Queensland,” says Wildlife Queensland Projects Manager Matt Cecil.

“ANiMOZ provides an accessible and fun way for kids (and adults) to learn about the Richmond birdwing butterfly, the threats it faces and the RBCN’s conservation work to ensure its survival. We are excited to be a part of the ANiMOZ Aussie Wildlife Vote 2020 and encourage everyone to vote for this very special, vulnerable species.”

ANiMOZ Director Joel Howland is hoping the vote gets the attention that Australian animals deserve.

“We’re in the age that scientists are calling the Anthropocene, where human activities are risking the extinction of millions of species,” he said. “ANiMOZ aims to help people – particularly our future leaders – fall back in love with animals, and this vote is a fun way to highlight more of our amazing creatures.

“The groups taking part in the vote are doing incredible, critical work, often with little-to-no recognition and a considerable lack of funding. Hopefully, everyone who casts a vote will take the time to look at what these groups do, and support them in any way they can.”

The vote runs from 1-31 August, and the three species with the most votes will feature on their own card in the next ANiMOZ packs, raising more awareness of their situation.

Link to the online vote: animoz.world/vote