The Gold Coast’s 52-km coastline from Point Danger to Jumpinpin attracts some 12 million visitors each year, but it also attracts endangered wildlife, which needs protection as the city’s swelling nightlife and tourism ventures spill out onto the sand.

By the City of Gold Coast’s admission, this sandy sweep of beaches and businesses suffers the human impacts of high urbanisation, pollution, and stormwater run-off. Consequently, these issues affect the region’s wildlife; however, that didn’t prevent Gold Coast City Councillors from unanimously approving the trial of a “pop-up” beach club extending some 20 m onto primary dune sand on Kurrawa Beach from December 2021 to 31 January 2022. 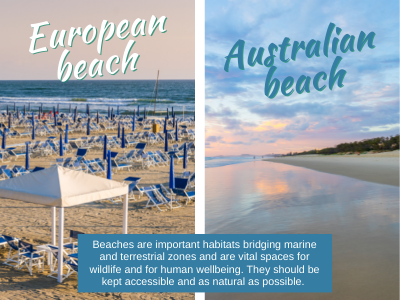 In response, Wildlife Queensland’s Gold Branch is “getting crabby” about the exploitation of coastal environments and asking Queenslanders whether they want pristine, natural beaches free from private on-sand commercialisation, or whether they want sunbed-crowded, litter-strewn Balinese-style sandpits largely devoid of wildlife and non-paying beachgoers.

Already, 15 tonnes of rubbish are reportedly cleared from Gold Coast Beaches annually, and erosion and dune degradation have resulted in billions of dollars worth of sand replenishment and dredging over the past fifty years. Allowing beach bars and for-profit activities directly on primary beach dunes will arguably exacerbate environmental damage, littering, and social issues on the Gold Coast and – if deemed commercially successful – will only encourage further exploitation of beaches across the state.

Adopted in 2013, the Gold Coast Ocean Beaches Strategy was designed to foster coexistence, reduce degradation and prepare for and minimise the impact of climate change on ocean beaches. Its central strategic outcomes were listed as:

Installing beach bars obstructs outcome one, as it would reduce the ability of ‘everyone to [freely] enjoy a beach experience’ by establishing private commercial zones accessible only to patrons. As clubs or bars are likely to be proposed for the most scenic or commercially viable sections of beach, Wildlife Queensland’s Gold Coast branch foresees conflict between existing and new businesses and between those wishing to enjoy natural values and those seeking other, more adult entertainment.

In Europe and many parts of South East Asia, beach bars and clubs already colonise huge swathes of beach, often right to the tideline. Charging for the use of sunbeds and for admission to the sand is tantamount to a fee for beach use in these places. Is that the beach experience Australians desire? Wildlife Queensland’s Gold Coast Branch President, Sally Spain, believes it is not.

“We worry that not only will beachside clubs cause damage to the primary sand dunes and subsume some sections of wildlife habitat, but also that these clubs will add to existing concerns about antisocial behaviour. Where are the additional surf-lifesaving and security staff to manage those threats coming from?” asks Spain.

The Ocean Beaches Strategy’s second outcome is clearly compromised by licensed beach clubs and on-sand bars. Spillover to the surf may see a rise in intoxicated clubgoers from the Gold Coast’s self-proclaimed “hottest seaside hang” entering the water, potentially increasing drowning risks – and (of course) increasingly coming into contact with vulnerable wildlife.

If on-sand beach clubs “pop-up” unchecked and spread over Queensland beaches, it will prove a slippery slope for shorebirds such as the vulnerable beach stone-curlew, vulnerable Australian painted snipe, and the rare sooty oystercatcher. Even more at risk is the migratory eastern curlew – already endangered and at risk from developments such as Redland City Council’s proposed Toondah Harbour venture into RAMSAR-listed coastal wetlands.

Already the hype about the beach club is prompting other councils to insist they need “toes-in-the-sand” tourism, with the Brisbane Times reporting that Moreton Bay Regional Council “wants in on the action”. If that happens, marine wildlife across the state is likely to face serious consequences.

Australia’s beaches are nesting grounds for six out of the world’s seven marine turtle species. All of these turtles are already listed as either vulnerable (the flatback,  green turtle and hawksbill) or endangered (the olive ridley, leatherback, and loggerhead).

“We know that light pollution is a key threatening process for marine turtles because artificial lighting can deter nesting and confuse hatchlings, which can’t tell onshore lights from moonlight or the horizon and may accidentally disperse shoreward and die,” says Spain. “We also know that both loggerhead and green sea turtles have been observed nesting on Gold Coast beaches,” she adds. “So why further risk their extinction?”

“If these clubs start taking over the sand across Queensland, noise pollution and increased human presence and traffic will create conflict between wildlife and humans,” Spain states. “More litter means more gulls, terns and even endangered albatrosses and petrels eating human food or scraps of litter and plastic left on the beach and washed into the water. That already kills millions of seabirds around the world annually. It’s unfair of us to expose species that are already teetering on the edge of existence to increased risk just so we can ‘party on the beach’.”

Infrastructure directly on the sand or shoreline is also vulnerable to tsunamis and tidal events. Even floods and king tides regularly wash shoreside rubbish bins – and even entire structures – into the ocean, causing heartache and pollution. The predicted catastrophic weather events and rising sea levels resulting from climate change will no doubt continue to cause havoc.

The 2019 mid-term review of the Gold Coast Ocean Beaches Strategy 9 stated that “new development will be set back to allow for natural coastal processes”, a prudent measure that appears to have been ignored in the case of the newly established beach club.

The Gold Coast Council’s 2019 mid-term review also states that “stakeholders are informed and actively participate in actions to manage ocean beaches”. Central to stewardship would be the protection of the beach’s wildlife and the organisms that most rely on healthy marine environments for their survival. However, were traditional owners or conservation groups directly approached about the risks of opening the door to European-style beach clubs? Of course not.

Wildlife Queensland’s Gold Coast Branch is interested in hearing what Queenslanders, and indeed Australians everywhere, have to say about the introduction of “pay to play” European or Balinese-style beach clubs on primary dune sand.

We urge everyone to fill out a brief 2-minute survey to express your opinion on these new developments and whether you think they are necessary additions to Queensland’s already world-renowned, highly “instagramable” stretches of natural sand and surf. Please complete the survey today.

What else can you do?

Wildlife Queensland’s Gold Coast Branch also suggests that those who feel strongly about beach bars write to the Council Chief Executive Officer and ask that your letter be circulated to all councillors. You can also complete a Council Survey here.

Suggestions to include in a brief, courteous letter include:

a) our beaches are part of our open space
b) intrusion onto sand by infrastructure is against the State and Council Coastal Management Policy
c) commercial outlets spoil the visual amenity and free and open beach access and experience
d) turtle hatching and wild bird habitat may be impacted
e) beach bars set a commercial precedent and other commercial interests may demand the same
f) alcohol and ocean beach bathing is potentially a dangerous mix
g) it is unfair to businesses that have not been given access to community land.

You can also attend a socially distanced vigil outside Gold Coast City Council from 8:00 am to 10:00 am on Monday 31 January  2002. At this first Council meeting of the year, the Gold Coast community can send the signal that our Aussie beaches are not up for grabs for private profit. Wear blue and/or yellow, if possible, to signal sea and sand.