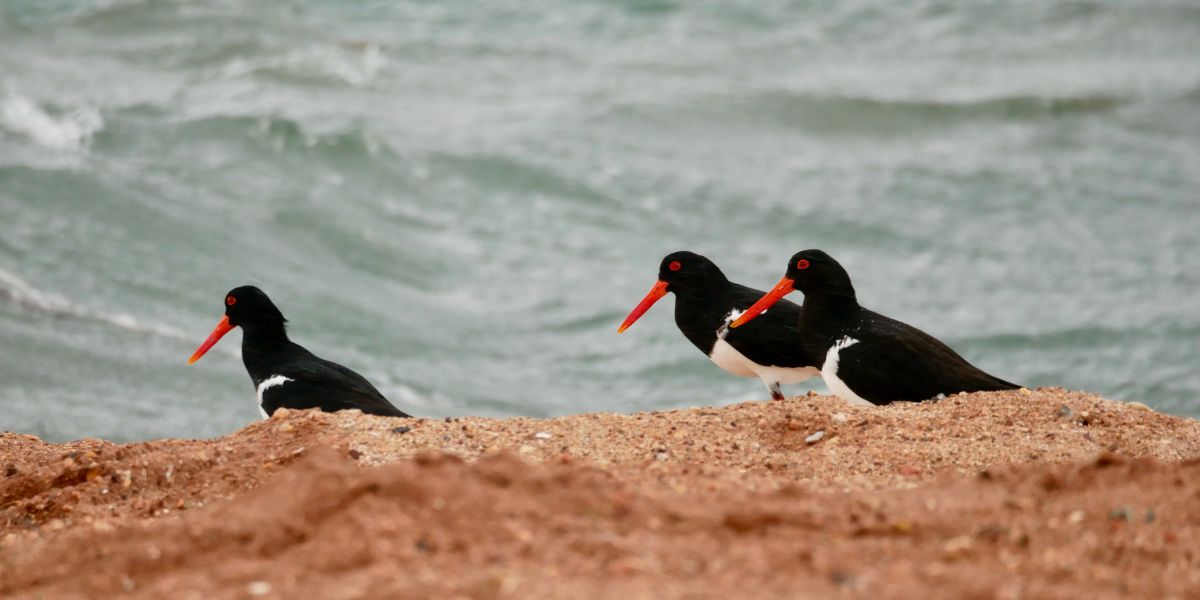 Reminiscing the marine life cruises that were a hallmark of the Bayside Branch over decades, the Cat ’o Nine Tails ferried passengers from the William Gunn Jetty at Manly to the island, where they enjoyed a guided tour of the foreshore, historic cemeteries and lime-making kiln.

This lovely island with its abundant bird and butterfly life has a dark past. Initially a quarantine station, from 1867 it became a high-security penal colony known as the ‘hell hole of the Pacific’. Although uninspiringly labelled Green Island by Cook and later Flinders, it became known as St Helena Island in 1827, a nod to the fact that an Indigenous man authorities nicknamed Napoleon had been briefly exiled there from Dunwich for stealing an axe. Napoleon is said to have soon escaped, but many other prisoners did not. 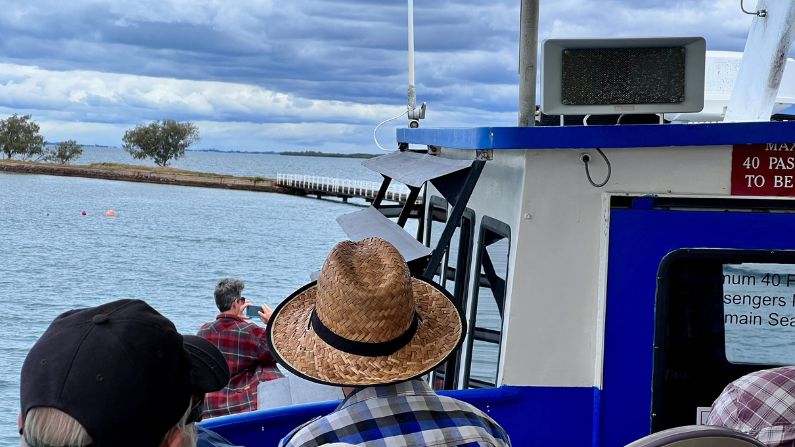 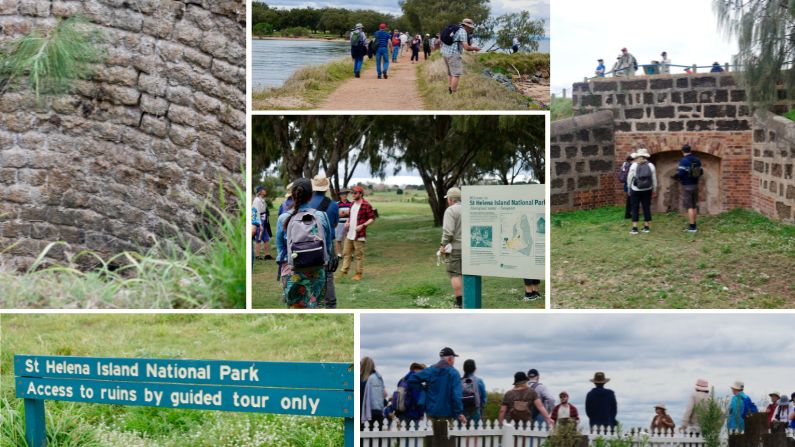 Clockwise from top: The lime burning kiln; guests departing the boat; the kiln and other island structures are made of conglomerate beach rock; listening to our guide talk about the cemetery; the prison is accessible only on a tour; our guide from the Cat ‘o Nine Tails.

The prison island was thought to be insurmountably escape-proof, and more than 9000 hardened criminals were incarcerated there over the years, many engaged in back-breaking work such as building dwellings from beach rock and burning shells and wood to make acerbic lime in the historic kiln, as well as making goods, growing food, and milling sugar cane.

Tragic reminders of past hardships are both the prisoners’ and warders’ cemeteries: one commemorating prisoners by number only and the other memorialising the infant children of some of the warders, several taken too soon by smallpox. The prison, despite its harsh punishments, was considered to be one of the most successfully run penal operations until its closure in 1932. Today, only around 7% of its historic buildings remain.

History gives this beautiful island a wistful element of human suffering, but for naturalists, it is hard to overlook the wildlife — even given the extent of clearing that occurred to transform the place into a prison and the introduction of non-native species to encourage agriculture. St Helena Island forms part of the Moreton Bay and Pumicestone Passage Important Bird Area and remains a safe haven for migratory shorebirds. 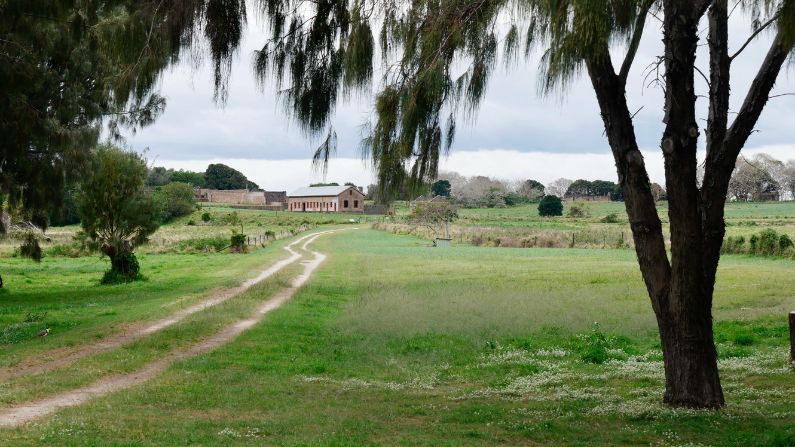 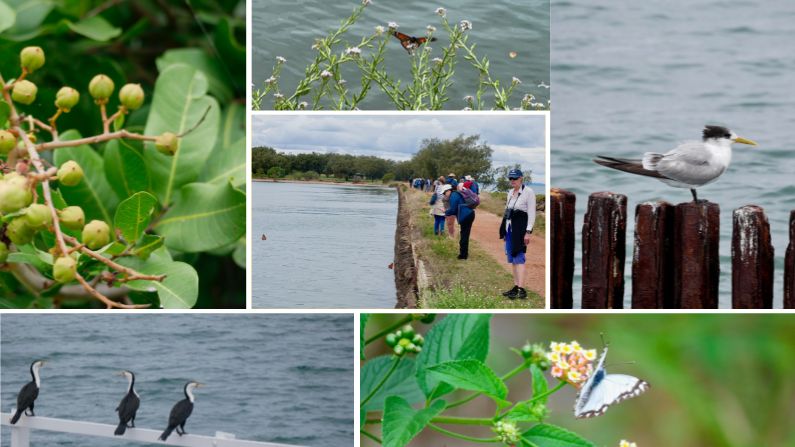 The island’s jetty was whitewashed with the leavings of cormorants and crested terns, all eagerly eying off schools of fish below. Monarch butterflies and whites fluttered against the rising wind, and in the small harbour, we watched a ray do its best to camouflage itself in the sand, thwarted by the clarity of the water. There was no sign of sharks, although shark-feeding was once encouraged here to deter the escape of prisoners. The island was once also used as a base for dugong fishing. Rightly, these endangered marine mammals are now protected.

Pied oystercatchers strutted the shoreline on their vividly orange legs, and rainbow bee-eaters zipped ahead of us as the crowd strung out to take in the sights. Although no wallabies were spotted, recent scat suggested we were just unlucky. 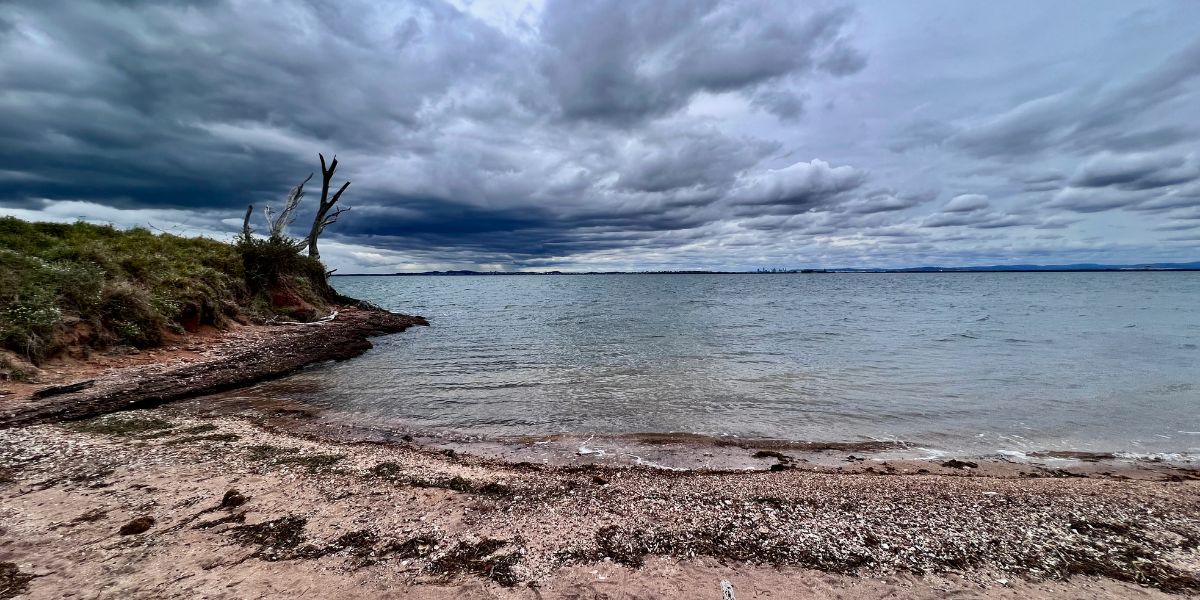 Above: The sky darkened over Brisbane city in the background in the afternoon, making for a slightly rough trip home.

As a squall rolled in before lunch, darkening the skies and whipping up the Bay’s notorious white-caps, attendees retreated to the boat for bread, cheese, ham and salad before setting off for less-inclement shores. On the way home, Quizmaster and Bayside Branch President Steve Homewood tested our grey matter (and grey mangrove knowledge) and took our minds off the grey-greenness of some faces with a quiz that had everyone outside of the suburb of Scarborough thoroughly stumped. The winners were the Baltais family — Bayside Branch royalty and instrumental members for decades.

Unfortunately, due to early delays and the worsening weather, there was little time to explore further, but the Cat ’o Nine Tails operates regular tour trips to the island, complete with historical dramas run in conjunction with the St Helena Island Theatre Troupe, for those wanting a more immersive historical experience.

For nature-lovers seeking a gentle walk along a quiet beach with the chance to get close to seabirds and enjoy perspectives of Brisbane city and Fisherman’s Island, this bay island just a half-hour ride away from the mainland makes a wonderful day-trip indeed.

To join the Bayside Branch or find out more visit https://wildlife.org.au/about-us/our-branches/bayside-branch/