A night that mattered for Wildlife – November 2016 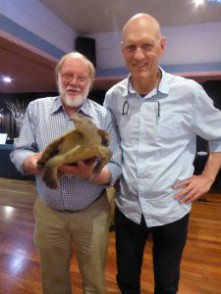 Why It Matters with Peter Garrett was the perfect end to a challenging year financially for Wildlife Queensland as dinner, drinks and inspiring conversation were shared by fellow conservationists on New Farm’s scenic riverfront last Saturday evening. One hundred and twenty-five guests came together to reflect on why environmental protection is more important than ever, and be inspired by the personal and professional motivations of one of Australia’s most renowned local and global campaigners.

Spirits were high as the sun set and Wildlife Queensland supporters took their seats to be welcomed by MC Professor Darryl Jones to Riverside Receptions, an accommodating venue where the hire fee was generously waived by Heino Martschinke and his team, and the room’s decorations were contributed in support of the evening’s important message.

An official welcome and personal reflection on why it matters by Wildlife Queensland President Peter Ogilvie included the poignant words from his own poetry, “Breathe deeply all the beauty that assails you, and ponder all the things to reconcile” – a fitting introduction to Garrett’s after-dinner address.

Garrett strode into the room as though among friends, warmly open and receptive to the throng of like-minded minglers. His frankness and authenticity relaxed his audience as he went on to speak of the typically Aussie childhood and familial influences which formed his reverie of the natural world around him and inspired a career in campaigning to “look after the joint”.

Garrett explored the many levels on which it matters to him, and the many angles from which to consider why. He covered the clear call to action of a land suffering physically from climate change and urbanisation, with heartfelt mention made of the Great Barrier Reef; shared his emotional motives for honouring the family values and traditions instilled by his grandmother; and in touching on the spiritual, acknowledged the complex wisdom of the traditional owners of this land and their Dreaming.

Garrett later tweeted: “We are made through and live in the natural world, all our actions must reflect that absolute.”

Garrett confessed to “wandering around in the bush” behind Parliament House each morning before taking his place inside as cabinet minister from 2007-13, no doubt a way of reconnecting with his inspiration and clearing his head for battle on its behalf. He earnestly applauded the efforts of Wildlife Queensland, made a plea for greater support of the organisation, and fondly recalled crossing paths with Society patron Margaret Thorsborne in working to preserve the natural heritage of Queensland’s Wet Tropics in the late 80s.

Garrett summed up with the sobering reality that the health of “this little blue dot in the universe” surely matters because it’s our home – the only one we have (if Stephen Hawking is serious in suggesting we colonise Mars he’s clearly “out of his tree”). But no words spoken on the night were able to capture the true nature of why it matters quite as profoundly as the unexpected reunion of Peter Garrett with an old friend, Travis the Mary River turtle.

Cameras that had been sneaking images of the famous speaker all night started clicking with abandon as Martin Fingland of Geckoes Wildlife reintroduced Garrett to the endangered turtle he’d first met in Canberra when fighting the development of the Traveston Crossing Dam. Garrett’s face lit up with childlike excitement at seeing the animal and he rushed to get a photo of his own. If that moment of joy and wonder didn’t answer the question of why it matters to Peter Garrett and should matter more than ever to us all, nothing did.

Wildlife Queensland wishes to thank all those who supported and attended the event, with special thanks to Peter Garrett and his team, Professor Darryl Jones, Riverside Receptions, and the sponsors of our raffle prizes: Girraween Environmental Lodge, Binna Burrra Lodge, WildNature Photo Expeditions, Currumbin Wildlife Sanctuary, and River City Cruises.