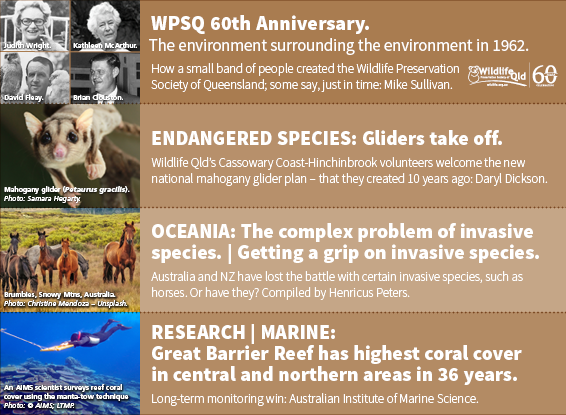 In the special 60th anniversary Spring 2022 edition of Wildlife Australia …

There are a lot of gliders in this edition. There is a lot about Wildlife Queensland in this edition too. It is something of a coincidence — but it is a happy one.

Probably no other organisation has done as much for gliders as has Wildlife Queensland, now celebrating its 60th year. The cute little night-gliding marsupials are miraculous and should, by rights, be a ‘people’s favourite’ — but so little has been known of them until recent times.

One of the groups to thank for changing that is Wildlife Queensland’s Queensland Glider Network (QGN) founded in 2006. There were thought to be just five glider species in Australia, but recent surveys and research by QGN now confirm at least 10 species.

Without the work of QGN and its linked projects, such as the recently formed Yellow-bellied Glider Project in Logan City, many colonies of gliders would have been lost forever, pushing them closer to extinction. Wildlife Queensland’s Cassowary Coast-Hinchinbrook Branch members are also celebrating the news that their long-awaited Mahogany Glider Recovery Plan has just been approved by the Federal and State Governments.

Wildlife Queensland was founded on the principle that all species of native flora and fauna warrant preservation, otherwise complex habitat systems will fail and diminish Australia’s true ‘natural’ wealth. That’s why it continues to grow conservation networks that today assist the brush-tailed rock-wallaby, the Richmond birdwing butterfly, quoll species, the platypus, and the echidna, and encompass the broader FaunaWatch and Coast Citizens Science Watch groups.

That’s why Wildlife Queensland is known for being more of a ‘doer’ than a talker. We hope you enjoy this 60th anniversary digest on a great Australian conservation organisation and the far-sighted volunteers who have made it that way.