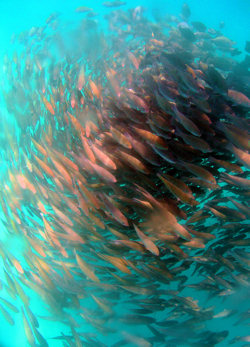 Following receipt of Australia’s report in January 2012 including a summary of proposed coastal and port developments with potential impact on the outstanding universal values of the Great Barrier Reef, the UNESCO World Heritage Commission took action.

A joint World Heritage Centre/IUCN reactive monitoring mission visited the property in March 2012. A report has been released that indicates in the absence of substantial progress in addressing the requested actions in the report by 1 February 2013, there is a distinct possibility of the inscription of the Great Barrier Reef property on the list of World Heritage in Danger.

In the 1960s the Great Barrier Reef was ‘in peril’ and now almost 50 years later again its future is in question. Mining and oil drilling were the threats then and today it is infrastructure associated with mining and other industries that are the culprits. It is ironic that today’s members of Wildlife Queensland find themselves involved in a campaign that the foundation members of our Society fought and won.

Why should the Great Barrier Reef be protected?
Its universal value has been long recognised and it was inscribed on the World Heritage list in 1981 satisfying four of the listed criteria. Its nomination was a certainty – combining its natural beauty and aesthetic importance, significant geomorphic features and ecological and biological processes containing the most important natural habitats for in situ conservation of biological diversity.

What triggered the concern is the reported rapid recent increase in proposals for coastal development with potential impacts on the heritage values of the property contained in Australia’s report. There has been an alarming substantial and consistent development since 2008 notably in relation to the coal seam gas and coal industries. To quote the joint reactive monitoring mission report ‘This unprecedented scale of development affecting or potentially affecting the property poses serious concerns over its long term conservation.’

The World Heritage Committee welcomed the initial positive results of the Reef Plan in addressing poor water quality and requested that the program continues with increased funding where necessary. In addition the findings of the joint mission have been noted and the Australian and Queensland Governments have been requested to address the mission’s recommendations in its future protection and management of the property. A Strategic Assessment and resulting long term plan for the sustainable development of the property has been requested; so has a hold on any new port development or associated infrastructure outside of the existing and long established major ports areas within or adjoining the property.

Enhanced management planning is required to protect the outstanding universal values of the property. An independent review of the management arrangements for the Gladstone Harbour is required. Finally, the Australian Government has to report back by 1 February 2013 providing an updated report on the state of conservation of the property, including implementation of actions outlined in the mission report.

Wildlife Queensland advocates that the Queensland and Australian Governments put aside their political differences and work together to ensure better management and protection for the Great Barrier Reef. It would be a very sad day and a shocking indictment that Australia’s poor management should result in this world icon being inscribed on the List of World Heritage in Danger.

Save the Great Barrier Reef from Coal – April 2012

What Price Development? The Great Barrier Reef at risk – November 2011