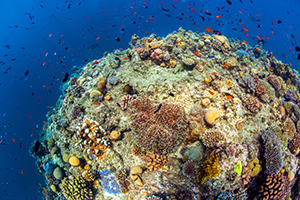 Reef 2050 Long-Term Sustainability Plan has been released. The draft document comprised of two components – the Reef 2050 Long-Term Sustainability Plan and the Reef Trust – presents some positives. However, Wildlife Queensland notes its lack of explanation as to how proposed actions will deliver desired outcomes, as well as the absence of an apparent investment strategy. The Australian and Queensland Governments are inviting comment on this overarching plan by 27 October 2014.

The draft plan was a collaborative effort by a broad group of interested parties including scientists, development and industry groups, fishers, government agencies and conservation groups, several of which have been critical of the draft, highlighting significant shortfalls. It is understood participants were given an opportunity to offer comment prior to the release of the document, and that several participant organisations forwarded comments to strengthen the draft document. However, it would seem their comments were noted without necessarily being incorporated.

According to government, the Reef 2050 Plan will satisfy the concerns of UNESCO. UNESCO has delayed its decision to list the Great Barrier Reef World Heritage Area as ‘in danger’ due to management and potential development decisions that would impact this natural wonder. Some time into next year UNESCO will make its final decision as to whether the Reef 2050 Plan will save the Queensland and Australian Governments from such embarrassment.

Encouragingly, governments are now clearly in a listening mode on particular matters and responding accordingly to public pressure. This is evidenced by their about-turn on sea dumping of dredge spoil in the marine park associated with the Abbott Point development. On the surface, dumping dredge spoil on land appears to be a positive and certainly there should be no dumping in any marine park or immediate environs. However, land dumping, unless conditioned appropriately, has the potential to result in another environmental disaster; the significant Caley Valley wetlands in the vicinity of Abbott Point must not be placed at risk by proposed land dumping.

Further evidence that the Queensland Government is finally listening can be found in their recent action on the use of funnel, round and opera house traps – the killer of platypus and other non-target species in waterways east of the Gore Highway and the Great Dividing Range.

From Wildlife Queensland’s perspective the draft plan presents some significant positives. A more collaborative and coordinated approach to turning the health of the Reef around is certainly one. Furthermore, development of ports in the Fitzroy Delta and areas of Keppel Bay have been prohibited. Mining industries will contribute significant funds to the plan over the next five years. It appears the fears of the tourist industry that further degradation of the Reef will impact them negatively have been allayed. The dumping of dredge spoil has been banned in some locations but not all. And finally, while government has not put the brakes on the ever accelerating coal and natural gas industry, some recognition has been given to climate change as a serious threat.

On the other hand, Wildlife Queensland is not convinced that the Reef 2050 Plan adequately advocates the long term protection and conservation of the Reef as its prime focus and that other legitimate uses must be secondary to that function. Appropriate management of the coastal zone and its catchment adjacent to the Reef is critical for the long term health of the Reef, yet how this will be achieved in the short term is far from clear. It is well known that water quality must improve and pollution decrease; have the necessary targets been set? Action to prevent the waters of the Reef being turned into a superhighway for coal carrying ships is also not clear. Timely action to ensure enhancement of water quality, reduction in sediment, nutrient and pollution loads is required, yet the plan fails to clearly delineate how the proposed actions link with, and will deliver, the desired outcomes.

The Reef Trust, jointly coordinated by the Australian and Queensland Governments with advice from the Australian Institute of Marine Science (AIMS) and other experts, will be one of the key mechanisms to assist in the delivery of the Reef 2050 Plan. It will focus on known critical areas for investment: improving water quality and coastal habitat along the Great Barrier Reef; controlling the current outbreak of crown-of-thorns starfish; and protecting threatened and migratory species, particularly dugong and turtles. There will be a strong focus on evaluating and adaptively managing the implementation of the Reef Trust to ensure it will contribute to the long term sustainable management of the reef.

The Australian Government has committed $40 million to the Reef Trust as part of its Reef 2050 Plan election commitment. Investment in Reef Trust priorities and specific commitments were to commence from July 2014.

The world recognises the Great Barrier Reef as one of its great natural wonders. There is a responsibility to ensure its protection. The government’s Reef Outlook Report 2014 found the Reef in poor condition. Is the Reef 2050 Plan going to arrest this decline in health?

If these actions do not occur the Reef 2050 Plan will be just another initiative that begins as a burst of action and then simply gathers dust. Do not let this happen. With their ear turned to the public, now is the time to influence governments to strengthen the Reef 2050 Plan by informing them of the positives and areas in need of strengthening from your point of view.

Public submissions on the Plan can be made via: