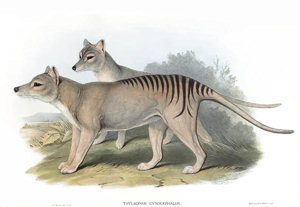 What extinct species would you bring back if you could?

Compered by Wildlife Australia co-editor Tim Low, four panellists made compelling arguments for each of their chosen species. The species had to have occurred in Australia, of course, and Tim had nixed dinosaurs and thylacines. Although extinction is a very serious subject, the point of the evening was fun.

The panellists responded to the challenge with panache and creativity. Professor Roger Kitching chose Anomalcaris, a marine invertebrate that was the first large predator known on Earth. It must have been a fascinating evolutionary driver and is also available online as a plush toy. Dr Jonathan Cramb spoke on behalf of the giant rat kangaroo, Propleopus, which was a carnivore. Humans are implicated in so many marsupial extinctions. Perhaps the return of this species could level the field and give marsupials a bit of bite-back. Concerned about the deleterious effect of drop bears on unsuspecting visitors to Australia, Professor Mike Archer chose a crocodile, Trilophosuchus rackhami, which may have climbed trees and could certainly clean up the drop bear situation. Dr Glen Ingram pleaded for the amazing, aquatic southern gastric-brooding frog (Rheobatrachus silus), last seen in 1981, with which he had an all-too-short personal research association.

Although the species are all extinct, some for thousands or millions of years, the arguments were fresh,  thoughtful, well-informed, spirited, and sometimes nonsensical. Really, you couldn’t go wrong with returning any of them, as the panellists all agreed. However, after a lively Q&A from the audience, the species were put to the vote and the popular choice was – the gastric brooding frog, if it could be made resistant to the devastating chytrid fungus.

‘It could be done!’ claimed Mike Archer, who had earlier given an enthralling talk on the Lazarus Project and its experiments on somatic cell nuclear transfer to clone extinct species.

Dr Carol Booth, who completes the Wildlife Australia editing team, reminded us that, in its 50 years, Wildlife Australia has occasionally skated near the edge of extinction but has been resilient enough to survive thanks to its superb quality and intensely loyal supporters. However, we must be alert to threats to its habitat. We want it still to be with us in another 50 years.

As Tim Low, MC for the night, said following the success of this rare and unusual (but not extinct) event: ‘These are not good times for the conservation movement, but the evening showed that conservation culture is very strong and lively, and by no means fading away as some might hope.’

Special thanks to talented violinists, Astar and Rawhinia Castle, for their welcoming and beautiful music that greeted the audience as they arrived.