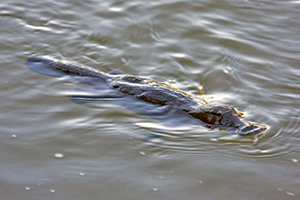 After years of campaigning by Wildlife Queensland to have opera

house traps banned, a government has finally listened and has action in hand to reduce ongoing threats to platypus.

Wildlife Queensland welcomes the advice received from Primary Industries Minister John McVeigh that there will be changes to the way in which freshwater traps, including opera house traps, are able to be used from 1 February 2015.

“This is certainly a step in the right direction,” said Des Boyland, spokesperson for Wildlife Queensland. “Funnel traps, round traps and opera house traps, the killers of many platypus over the years, with openings larger than 5cm will be banned in any waterway east of the Great Divide and the Gore Highway. The permitted size of the opening will restrict platypus access,” he said.

Wildlife Queensland commends the action taken by Minister McVeigh. It is not often that Wildlife Queensland has the opportunity to praise the Newman Government but this is one such occasion. Furthermore, not to detract from this great news, this Minister’s approach and actions with regard to biosecurity also warrant applause.

Of course, all this hard work for the platypus will be futile if a strong enforcement and compliance program is not implemented. The time delay in affording platypus protection should enable the Government to instigate a sound educational program to make people aware of their new responsibilities.

One of the major challenges is defining the occurrence and the natural habitat range for the platypus – the western limits are certainly unknown. Within available resources Wildlife Queensland is addressing this challenge with its PlatypusWatch program. This community based program supported in part by several SEQ local authorities, aims to document where platypus occur. This information helps drive conservation actions now and in the future to protect this extraordinary animal.

Following discussions, Wildlife Queensland has every confidence that, if it is demonstrated that platypus are at risk outside of the yet to be legislated restricted area, this government will again listen and act to rectify the situation.

Wildlife Queensland acknowledges the support for this campaign received from members, the public and the media which undoubtedly assisted in achieving this desirable outcome.

“Wildlife Queensland also acknowledges that its concerns for our wildlife were shared by the Department of Environment and Heritage Protection,” concluded Boyland.