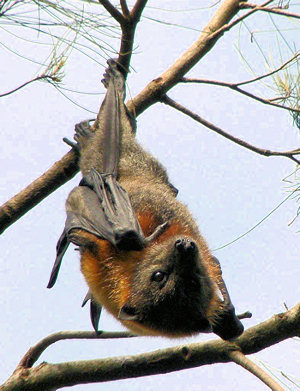 ‘There is no question that the pre-election commitments of the

new LNP Government will be enacted in time. While such action is disappointing, many aspects of the policy have been clarified’, said Des Boyland spokesperson for Wildlife Queensland. ‘It is inappropriate to discuss in detail the issues raised but it appears the use of lethal deterrents will be confined to damage mitigation permits for crop protection.’

Minister Powell certainly heard the message from the conservation groups present. He advised that in his opinion the policy was one of balance taking into consideration the views of a range of stakeholders. However Minister Powell welcomed further comment on aspects not yet finalised.

‘It appears that it is the Minister’s intention to use lethal deterrents as a matter of last resort for farmers where other non lethal means have failed’ stated Boyland. ‘However the devil is always in the detail and until the actual changes in regulations are gazetted the real situation will not be known’.

According to Boyland, in order to limit the harm of the LNP Government’s policy it will be vital to ensure it is vigorously enforced. Furthermore community education about flying foxes and the vital role they play in ensuring ecosystem functions continue unabated would go a long way to dispelling the myths associated with these animals.

‘Wildlife Queensland certainly appreciated the manner in which the meeting was conducted. The Minister acknowledged the passion and care of those present for flying foxes’, said Boyland. ‘His offer for further consultation on certain aspects was a positive. Unfortunately the future for flying foxes appears to be bleak under the new LNP Government. This of course is in stark conflict with the care demonstrated for the animal welfare of the turtle and dugong and the funding investment in the koala’.

Ongoing discussions are also occurring between various state governments and the Commonwealth Government about future management of species of flying foxes covered by the Environmental Protection and Biodiversity Conservation Act. Again the outcome for the future of these flying foxes is unknown.