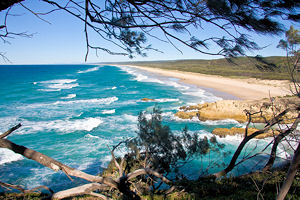 A broad range of local, state and national conservation groups

including Wildlife Queensland have expressed their support of the Quandamooka People of North Stradbroke Island and their actions in the High Court recently in defence of their native title rights.

Senior representatives of the Quandamooka people have since rejected claims by Premier Newman that his government has a mandate for its legislation which extends sand mining on the island until 2035 and expands the area available to be mined, without the consent of the native title holders.

QYAC chief executive officer, Cameron Costello, said continuing claims by Mr Newman that people voted for his policy to extend sand mining on the Quandamooka people’s land without their consent, are spurious and will not go unchallenged any longer.

“QYAC does not believe people voted to undermine the native title rights of the Quandamooka people. The LNP did not tell voters this is what it intended to do,” Mr Costello said.

QYAC is the registered native title body corporate managing, as agent, the native title rights of the Quandamooka people, the traditional owners of North Stradbroke Island and the lands and waters of Moreton Bay (“Quandamooka”).

In response to QYAC’s recent High Court challenge to the Queensland Government legislation, Mr Newman told the Queensland Parliament, “We said upfront prior to the election that we supported sandmining continuing on North Stradbroke Island. … We made it very clear that we supported sandmining continuing. We said that in the election campaign.” (Hansard 6 June 2014, p. 2226)

“Most people had no idea the LNP, if they won the election, were going to trample on the rights of the traditional owners of the land and undermine their Indigenous Land Use Agreement (ILUA) with the State of Queensland,” argues Mr Costello who maintains that Mr Newman, the LNP and mining company Sibelco (who engaged public affairs company, Rowland, to develop and implement a third party campaign to influence public opinion and political decision making, to ensure the continuation of sand mining until at least 2027) misled the people of Queensland about the real nature of the issue.

The original North Stradbroke Island Protection and Sustainability Act 2011 was introduced by the Bligh Government, with the consent of the Quandamooka people. It extended the lease on the major North Stradbroke Island sand mine – the Enterprise Mine – until 31 December 2019 and restricted the area that could be mined within the Enterprise Mine leases. The major lease at Enterprise – ML1117 – expired in October 2007.

The Quandamooka people believe the Newman Government’s 2013 Act, amending the original 2011 Act, contravenes the Commonwealth Native Title Act 1993 and are asking the High Court for its ruling.

Section 109 of the Australian constitution states that when a law of a State is inconsistent with a law of the Commonwealth that latter shall prevail, and the former shall, to the extent of the inconsistency, be invalid.

QYAC is calling for the support of public donations which can be made on the Quandamooka Facebook site.