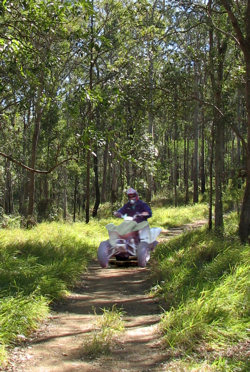 Wildlife Queensland together with many like-minded people recently called upon the Sunshine Coast Regional Council to protect Woondum National Park.

Woondum National Park is not only home to threatened species and significant regional ecosystems, it  provides opportunities for people to interact and enjoy nature. Unfortunately people’s enjoyment was at risk because the previous state government approved a noisy quad bike operation and there is an apparent reluctance of the current responsible Minister, Steve Dickson, to cancel that approval.

However all was not lost. The Sunshine Coast Regional Council could have protected this National Park and the wildlife it supports by rejecting an application to run the quad bike tours as a home-based business when it met on 18 October.

This Council is fast establishing a reputation as caring for the environment while balancing the needs of the community. Wildlife Queensland is of the opinion that the demonstrated care for the environment is one of the principal attractions to the region.

It is appreciated that Council’s focus should have been on the operation of a home based business after all it is the responsibility of the state government to manage national parks.

However the public good, as well as other factors, should have been taken into consideration.

It was, and still is, the view of Wildlife Queensland that approving this application would not be in the interest of the public good and will bring adverse criticism. Rejecting this application would have protected Woondum National Park, reinforced the Council’s care for the environment and brought applause not only from concerned citizens but those who wish to continue to enjoy the amazing Woondum National Park.

Unfortunately the application for a quad bike home business was approved with the Mayor using his vote to break the deadlock after a two hour debate. Wildlife Queensland wonders why such a decision was taken and judging by the adverse publicity recorded on the reader’s poll of the Sunshine Coast Daily so do many others.