With a new commitment to introduce a bag ban coming from the ALP Government in 2015, Wildlife Queensland ran a political lobbying and community awareness campaign to get plastic bags banned as soon as possible.

In November 2016, Wildlife Queensland spoke at the announcement by the LNP Opposition to support the proposed ban and backed this up a week later when the State Government announced the introduction of a ban on lightweight plastic bags (including compostable and biodegradable bags).

The ban was formally introduced in Queensland in July 2018.

Wildlife Queensland is continuing campaigning to get thicker plastic bags banned and is working for a national phase-out of these items in 2020. 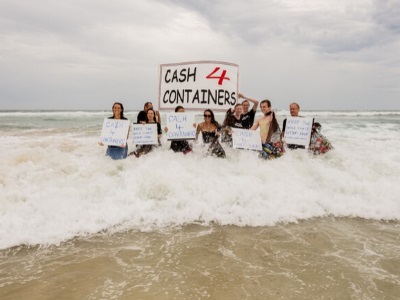 Wildlife Queensland backed the Boomerang Alliance campaign for container deposits, in parallel with our plastic bag campaign. We helped bankroll a public campaign in key coastal communities on the Gold Coast, Sunshine Coast, Cairns and Central Queensland that sent a very clear message to politicians about the level of public support for a scheme.

In its first year, the container refund scheme has:

Over 2000 community groups participate in collections, adding to their fundraising.

Find out more about the Container Refund Scheme and how you can donate your refund to help our native wildlife.

Wildlife Queensland has continuously lobbied for a legislated ban on the deliberate release of helium balloons.

In 2017, the State Government confirmed that the deliberate release of helium balloons was an act of littering.

We also helped draft a motion by Brisbane City Council that led to the local government association voting to support a call for a state ban on helium balloon releases. This has been backed by many local governments imposing a ban on the practice.

In July 2021, the Boomerang Alliance released its position statement on helium balloons.

Wildlife Queensland and the Boomerang Alliance called on all State and Territory governments to ban helium balloon releases throughout Australia and urged people to join Boomerang Alliance’s Plan on stopping the release of lighter than air balloons.

Key Date: Advice to all schools about plastic-free fetes and helium balloons distributed by Wildlife Queensland in July 2017

To help schools transition to plastic-free fetes and reduce single-use plastics, Wildlife Queensland drafted guidelines for use by all schools. In 2017 these were distributed to all schools in the State, along with specific advice on helium balloon releases (pdf).

Whilst we have not monitored the effect of our materials, it is clear that many schools have got the message and both P&Cs and teachers are now actively taking steps to make their schools and their school fetes plastic-free.

Our next agenda has been focused on single-use plastic takeaway items. Items such as straws, cutlery, containers and cups. These still represent about 36 per cent of all litter in Queensland and remain a significant waste problem. Wildlife Queensland continues to back the Boomerang Alliance Plastic Free Places campaign to phase these out and has supported the campaign to get the State Government to act.

In November 2019, the State Government released a Plastic Pollution Reduction Plan that included proposals to introduce a legislated ban on plastic straws, stirrers, cutlery and plates in 2020 and, after further investigation, coffee cups, other plastic items and heavyweight plastic bags.

Wildlife Queensland supported a ban on single-use plastics in Queensland.

The consultation period ended 30 April 2020 and the State Government has reported that over 19,500 submissions and surveys were received. This included 600 individual submissions. Over 90 per cent of responses supported a ban on single-use plastics.

Queensland is the second state, after South Australia, to introduce legislation to ban these products. When passed it will mean these products will not be sold or provided in Queensland after July 2021. An exemption for those with disabilities having access to products they need, and for products that are certified compostable to the Australian Standard, has been included.

With South Australia and the ACT, Queensland is leading the national policy debate to get rid of these problematic plastic takeaway items.

The Queensland Government has introduced legislation to ban plastic straws, stirrers, cutlery and plates/bowls in Queensland. Subject to consultation, it will include expanded polystyrene (foam) cups and clamshell containers. We are optimistic the legislation should be passed in February 2021, as all political parties have previously voiced support.

Queensland is the second State in Australia to introduce a ban on these items after South Australia passed legislation in September.

In a historic decision, the Queensland Parliament unanimously passed the Waste Reduction and Recycling (Plastic Items) Amendment Bill 2020 today to ban certain single-use plastics from use. From 1 September 2021 plastic straws, stirrers, cutlery, plates and bowls and expanded polystyrene cups and containers will be banned.

The Queensland Government intends to add other plastic items such as coffee cups/lids, other plastic takeaway items and heavyweight plastic bags after further investigation.

Wildlife Queensland continues to campaign to get rid of problem plastics, particularly those that end up as litter and threaten both wildlife and habitat.

From 1 September 2021, certain single-use plastic items will be banned in Queensland, including plastic straws, stirrers, cutlery, plates, bowls and expanded polystyrene cups and containers. Community groups that use single-use packaging for community or fundraising activities may be affected by the ban.

The Boomerang Alliance is running a series of forums across Queensland from July to October 2021 for community groups to learn how to become ban compliant.

Visit the forum event page for details and to register.

Stay up-to-date with the latest news