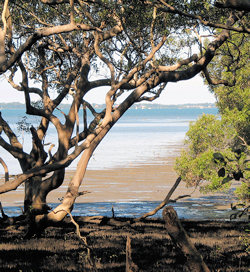 While Moreton Bay seagrass meadows seemed to fair well after the 2011 flood, another major flood could be putting even a resilient system to the test.

Will the recent floods bring silt and threaten the health of Moreton Bay?
Photo © Wildlife Queensland

Silt is a killer. While a certain amount is naturally to be expected and abundant during floods, it is poor catchment management that is the culprit behind massive erosion and life smothering mud.

It’s too much silt in the system that killed over 1000 ha of seagrass in Bramble Bay north from the mouth of the Brisbane River.  While Moreton Bay has shown resilience after the 2011 flood, another event could be pushing the system too far.  As was the case for the River Mangroves along the Brisbane River which were wiped out in that flood.

We know turnings creeks into barren spoon drains will ultimately harm fish habitat such as mangroves and seagrass and will produce life threatening and destructive flows.
Surely then with climate change and the extreme events it brings upon us shouldn’t we be urgently repairing our catchments?