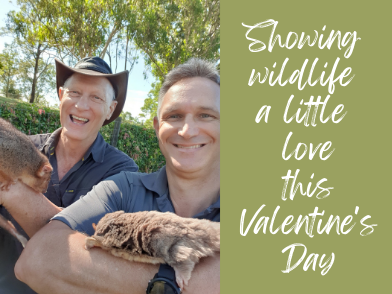 Moreton Bay Region Council chucked out the Valentine’s chocolates to show wildlife love with a seasonal safety trial. Wildlife’s Queensland Projects Manager Matt Cecil was on site (along with some furry friends from Geckoes Wildlife Presentations) for the launch.

This Valentine’s Day in Moreton Bay, it’s all about getting cuddly with some of our cutest locals … our native animals.

“We’ve chucked out the chocolates and got rid of the roses and are instead showing our native animals the love with a fresh new way to get drivers to put the brakes on,” Mayor Flannery said.

“Our wildlife has been getting all loved up during breeding season, meaning our parks and forests are now teeming with joeys who are making their way out into the world, placing them at risk when it comes to the roadways.”

The signs have been installed at 12 sites across Moreton Bay for the 10-day trial, starting on February 14.

The material is like that used for roadwork and building sites signage, meaning they’re also reflective when illuminated by passing headlights at night.

Mayor Flannery said that, sadly, Council gets more than 700 calls a year to remove deceased animals from its roads.

“Our vision for the future is to ‘go green as we grow,’ and driving down the road toll for our animals is a huge part of that mission,” he said.

“We want to help drivers avoid animal collisions, and prevent injuries and fatalities, as well as costly insurance claims.”

“We’ll use the data collected from both the signed and non-signed locations to see how effective this program is,” Cr Grimwade said.

“These corflute signs are designed to be a seasonal response to the risk of wildlife on roads during breeding and joey seasons and can be rapidly deployed as needed.

“They’re just one of a range of Council’s driver awareness measures such as VMS boards and permanent roadside signage and road stencils, and fauna movement infrastructure. I’m confident they’ll make a real difference.”

“I love the shape of the signs – they’re eye-grabbing, they’re large, they’re novel, they’re new – I think they’re going to create some interest within the community, and the message to slow down and be aware in areas where you see these signs will be loud and clear,” Matt said.

“It’s often the kids that say to Mum and Dad, ‘Hey, there could be koalas along here. I’ve just seen the sign. Then, for the rest of that drive, they’re looking for koalas or kangaroos or whatever it happens to be.’”