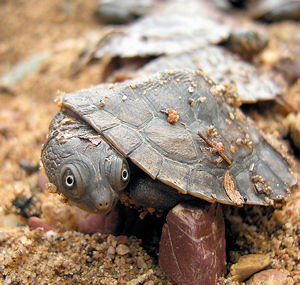 They say you don’t know what you’ve got till it’s gone!

That was almost the case for the amazing Mary River Turtle. You see it wasn’t until 1994 that they were formally described as a new species and by then they were on the edge of extinction.

This is a fascinating story of how one man, a turtle egg collector, and the trade in ‘penny turtles’ as pets almost wiped out the Mary River Turtle. It’s also the story of how, with your help, this ancient, unique Queenslander can and will be revived.

Each year between 1962 and 1974 around 15,000 eggs of the Mary River Turtle were collected, mostly by one man who sold them into the pet trade. They were traded under the name, the common saw-shelled turtle Elseya latisternum, and hatchlings were known as penny turtles.

Turtle biologists who saw them in pet shops could see they were a unique species. They called them ‘short-neck alpha’, however they were not able to formally describe them because the pet traders refused to reveal their source of supply. Turtle enthusiasts and biologists continued to search for the location of the turtle in the wild for 25 years until eventually they were ‘discovered’ at a property on the Mary River in late 1990. Four adults were collected and the Mary River Turtle was formally described as a new species within a new genus in 1994. No other turtle in the world is closely related to it.

The massive number of eggs collected for the wildlife trade resulted in an entire generation of turtles being removed from the wild, leaving a reduced, aging population.

Today the Mary River Turtle is one of the most endangered turtles in the world. It’s listed as an endangered species internationally by the IUCN and by both the Queensland and Australian Governments.

Even now, in 2014 hatchlings are rare. You see there is another problem, one that we need to tackle if the Mary River Turtle is to survive.

Today the biggest threat to the survival of the Mary River Turtle is predation of eggs by foxes, dogs and goannas and trampling of nests by cattle. This current threat has the potential to remove another generation of turtle hatchlings from the wild and drive the species to extinction.
We can turn things around and rescue the unique and endangered Mary River Turtle and we’ve developed a plan to do it.

We need to ensure that in 2014 all nests of the endangered Mary River Turtle are protected from predators and trampling by cattle. This requires identification of all nest sites, the placement of nest guards, the installation of electric fencing and ongoing monitoring, so that in case of floods the eggs can be moved.

Until recently only a handful of nests avoided predation by foxes, dogs and goannas and trampling by cattle. This resulted in very few hatchlings surviving, however this number is now on the rise.

The dedication and hard work of Marilyn Connell and the members of Tiaro Landcare Group are making the difference. They have been implementing a program to protect turtle nests for a number of years. They now know exactly what to do to grow the population of the Mary River Turtle.

The Mary River Turtle is faithful to traditional nest sites that the same females use each year. Their location is a strongly guarded secret, but Marilyn and her team know where they are.

Each female turtle lays one clutch of 12 to 25 eggs. They begin laying in mid October and continue throughout November and December. Natural incubation periods are around 50 days and hatchlings emerge throughout December and until February. Marilyn knows this too so during this time the nest sites are closely monitored.

When a female lays her eggs the very next day Marilyn and her team spring into action. They place a specially designed plastic screen on each nest that is pegged down and lightly covered with loose sand. That eliminates the foxes, dogs and goannas. Then they install electric fencing around the entire nesting site to exclude cattle and eliminate the risk of trampling. On an ongoing basis they monitor the site, paying particular attention to any heavy rain event. In the event of flooding they rescue the eggs and relocate them to the highest point on the bank.

This dedication and absolute commitment to the Mary River Turtle is exceptional and many clutches of eggs have successfully hatched that would otherwise have been lost. Yet there is only so much a small volunteer team can achieve and with limited resources, only so many turtle hatchlings that they can help survive.

Like Marilyn and Tiaro Landcare, Wildlife Queensland is committed to the survival of the Mary River Turtle. So we’ve formed a partnership to deliver this project that will see all Mary River Turtle nests protected. We’re going to expand the existing program until 1,000 hatchlings are protected every year. But we can’t do it without your support.

Wildlife Queensland is stepping in to help, but this year it’s up to you and me to save the Mary River Turtle. In the past Tiaro Landcare received funding from the Queensland and Australian governments. But not anymore.

Mary River Turtles are listed in the world’s top 40 most endangered turtle species. They have a very restricted distribution and can only be found on the Mary River in south east Queensland. The habitat of the turtle is not in a declared protected area like a national park. The river exists entirely on private property and as a result, the habitat is inadequately protected.

He say’s “We know protecting the nest will work and that by implementing these actions we’ll save the Mary River Turtle from extinction. Nests that are protected and fenced the morning after eggs are laid result in 80% of protected eggs producing hatchlings”.

One man, a turtle egg collector and trader in penny turtles as pets is all it took to bring the Mary River Turtle to the brink of extinction. He carried out most of the turtle egg harvest from the Mary River when it was legal, between 1962 and 1974, by then the damage was done. Legal trade in turtles in Queensland ceased in 1974.

Interviews with the egg collector has revealed many details of the Mary River Turtle story. After the last laying of each season entire sand banks throughout the area were dug up to make sure that no nests had been missed. It is likely that there was little or no recruitment of Mary River Turtle hatchlings during this time over a 120 km stretch of the Mary River and over one decade, 120,000 eggs were taken.

The Mary River Turtle takes an exceptionally long time to reach maturity. According to population models, the projected age at maturity is around 25 years This aging population of turtles can’t live forever. We urgently need to ensure a new generation of Mary River Turtle hatchlings survive.

We can do that by ensuring all nests are protected in 2014. We know the biggest threat to the survival of the Mary River Turtle today is predation of eggs by foxes, dogs and goannas and trampling by cattle. This current threat has the potential to remove another generation from the wild and place the entire species at risk of extinction.

The solution is very direct and very successful: protect all turtle nests from predation and trampling. To achieve this I urgently need $30,000. This will ensure 1,000 Mary River Turtle hatchlings survive in 2014.

Please supporting this exciting project that will save the Mary River Turtle from extinction. Please make your donation today.

It’s not every day that you can save a threatened species from extinction. Please help the Mary River Turtle continue its long evolutionary journey by ensuring turtle hatchlings can return to the wild!

You can also make your donation online. We’ve set up a special page at www.rainforestconnections.org/projects/MaryRiverTurtle

What your donation will do.

By reaching our $30,000 target a total of 75 Mary River Turtle nests will be protected ensuring a minimum of 1,000 hatchlings will return to the wild.

It costs $400 to protect each Mary River Turtle nest. Each nest can have between 12 and 25 eggs. Protected nests have a turtle hatchlings success rate of around 80%, so $30 will ensure that at least one and possibly more turtle hatchlings will survive.

For more information on Wildlife Queensland’s activities, call us on +61 7 844 -1 or send us an email.