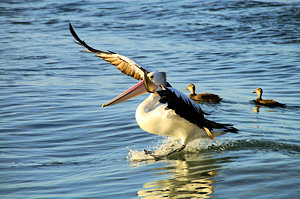 Prior to the March 2012 State election, there had been a very strong push from the recreational fishing lobby to allow

fishing in the green zones (equates to terrestrial national park status for the protection of all species) designated within the Queensland Marine Parks. Wildlife Queensland and other conservation groups provided a counter argument requesting that the status quo remain and no fishing be permitted. The LNP elected not to make an election commitment one way or the other.

Since the LNP came to power, the issue has not gone away. The Government has been considering a scientific review of the effectiveness of marine parks but such action has not appeared on any Government list of priority actions. Furthermore Mark Robinson MP, Member for Cleveland, sponsored a formal petition signed by 249 persons that was tabled in the Queensland Parliament calling for fishing in green zones.

In Minister Dickson’s response, changes to permitted uses in green zones were ruled out. Quoting the Minister’s words ‘Given the extremely large area of marine waters in Queensland available for recreational fishing it is not considered that any change is required to existing State marine park zones at this time’. His speech also confirmed that adequate science and consultation underpinned the recent 2009 rezoning of Moreton Bay Marine Park, dispelling arguments to the contrary.

Wildlife Queensland welcomed this decision and has given credit when credit is due.

Wildlife Queensland has written to Minister Dickson applauding his decision. A copy of the letter was forwarded to the Premier and also Hon Andrew Powell, Minister for the Environment and Heritage Protection.

Wildlife Queensland acknowledged the care for the environment the Government has demonstrated on this occasion and took the opportunity to state that the Government has an obligation to protect both the terrestrial and marine biodiversity. The need for Queensland Marine Parks in the Gulf of Carpentaria was also raised.