The Network partners with other like-minded organisations and provides members with science-based information to cultivate and care for birdwing butterfly vines.

The RBCN has completed work on a detailed desktop map of targeted Richmond birdwing habitat corridor locations across South East Queensland. Key locations and properties within the defined area have been ground-truthed for mapping accuracy and suitability as vine planting locations.

The RBCN has funds for 1,000 vines to be planted within the corridor where suitability is determined.

Support for this critical corridor project has been provided by a grant from the Bank Australia Impact Fund. Bank Australia supports projects that create positive social and environmental impact across Australia and the RBCN is indebted for the support with this project.

Watch this video to learn more about the amazing Richmond birdwing butterfly and the captive breeding and release program being conducted by the Queensland Department of Environment and Science and supported by the RBCN and David Fleay Wildlife Park.

In 2017, Wildlife Queensland launched its Bring Back the Birdwing: 500 Vines appeal to raise funds to plant 500 vines essential to the survival of this vulnerable native species in the Tamborine-Albert River Corridor. Working with Logan City Council, the project involved propagating and growing the vines in selected nurseries, planting them in strategically chosen locations and then maintaining them to ensure they have the best opportunity to survive. 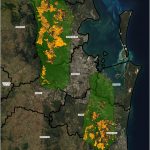 RBCN recommended nurseries where you can purchase birdwing butterfly vines.

Anecdotal sightings of Richmond birdwing butterflies are rising as we continue our mission to ‘Bring Back the Birdwing’ and plant 1000 vines in specifically chosen corridors throughout South East Queensland.

The RBCN and Moreton Bay Regional Council hosted a birdwing butterfly vine planting and care workshop earlier this month for Land for Wildlife property owners in the Moreton Bay region.