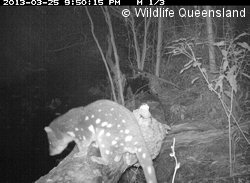 A total of 8 sites were surveyed within the Mt Alford area utilising 14 surveillance cameras and chicken carcasses as bait to attract the elusive quolls. Quoll Seekers Network Project Officer, Alina Zwar together with avid quoll enthusiasts Ivell and Jim Whyte, headed the investigation along with a team of volunteers.

In March 2012, a quoll road-kill was found on Mt Alford road, and along with sighting reports from the community highlighted the need for surveys to be undertaken. This conservation initiative also involved engaging with the local community through an event ‘Quoll Discovery Experience’ held at The Outlook in Boonah back in February.  Permission was

A healthy male quoll was photographed, providing evidence that they are still persisting in south-east Queensland.
Photo © Wildlife Queensland

sought from local residents and Land for Wildlife owners to gain access to their properties, some of which included trekking up mountains, trudging through waist-deep grasslands, and exploring caves with 10 kgs of chicken carcasses and cameras in tow, all in hope of capturing a picture of a quoll. After three months of searching, the hard work has paid off. A healthy male quoll was photographed, providing valuable evidence that they are still persisting in the region

Quolls are Australia’s largest carnivorous marsupials on the mainland and an important keystone predator; if we can protect them, we can help conserve many other species.

Camera traps are a very useful tool for monitoring wildlife and the images assist in making important conservation management decisions. This project has enabled important data to be collected about many species that occur in the area, not only about quolls, but also other endangered species including the brush-tailed rock wallaby, and the threatened koala, along with feral animals that may be in competition with them and threatening their survival.

We hope this evidence will support further quoll seeking activities and help raise awareness of the plight of quolls in Queensland. You can help too, by joining the