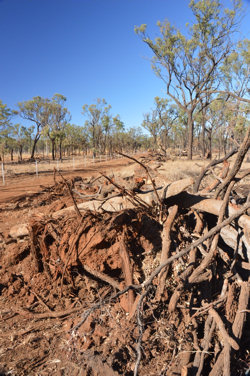 Wildlife Queensland wonders where and when will this madness end? The national park estate is about 4.8% of Queensland – well below international recognised desirable standards and certainly below the average in the various States and Territories.

Today the primary purpose of national parks is to afford protection to and conserve our natural heritage, landscape and cultural heritage. A secondary purpose is to allow people to commune with and interact with nature in passive ways. This well established management principle has been guiding management of national parks not only in Queensland. Even in the halcyon development days of the Bjelke-Petersen Government national parks served their primary purpose and were not exploited to service the State’s debts now a prime purpose according to Minister Dickson.

On 20 August 2013, the Hon S.L. Dickson, Minister for National Parks, Recreation, Sport and Racing introduced the Nature Conservation and Other Legislation Amendment Bill (No2) 2013 into the House building on the already retrograde amendments to the Nature Conservation Act 1992. At that time that legislation was at the cutting edge of conservation legislation. Wildlife Queensland agrees that a review is warranted to strengthen the current legislation in light of its failure to arrest biodiversity decline. However this current Bill weakens the purpose of the 1992 Act and sets conservation in Queensland back decades. The Bill has been referred to the Health and Community Services Community for review. That Committee is calling for submissions by 13 September 2013 with a report back date to the Legislative Assembly during October.

Wildlife Queensland has not had the opportunity to examine the Bill in detail. However in his speech to the Legislative Assembly, Minister Dickson indicated that the Bill will result in the most significant changes as to how national parks will be managed. The prime purpose is no longer conservation of wildlife but the object of the Act is being expanded. The number of tenures will be drastically reduced. It is claimed that the cardinal principle of management, that is – a national park is managed to the greatest possible extent for the permanent preservation of the areas natural condition – has not changed. Yet in the same breath the Minister states management principles have been broadened. These statements negate one another. Other retrograde changes will result in the passing of this Bill. Wildlife Queensland will be making a submission and would encourage all those who care for national parks to also submit their views to the Health and Community Services Committee, Parliament House, George Street, Brisbane Queensland 4000 or by email.

Copies of the Bill and the Explanatory Notes are available here.

The Hon. Steve Dickson is reported as stating that ‘Unashamedly I am looking to make money out of this’ – referring to throwing national parks open to developers and tourist operators. The Minister is certainly not making money out of the national parks as cow paddocks as $0.5M of taxpayers money has been or is being spent on fences to keep stock in national parks. It is Wildlife Queensland’s understanding that there is no agistment being collected and if the arrangements are for only short term why are some graziers spending significant sums in providing waters to some holdings? There are far less expensive ways. Wildlife Queensland is well aware that sectors of the grazing industry have been lobbying Governments for some time to open up national parks for grazing. It appears that we are well past the thin edge of the wedge in having grazing in national parks on a permanent basis.

This is not the only threat. These areas were set aside to protect our biodiversity but now will be adventure sites for four wheel drivers, quad bike and horse riders.

However Wildlife Queensland fears the worst is yet to come. This State Government is attacking the environment and its wildlife on all fronts.

At the Commonwealth level, the Abbott led Coalition has promised to devolve ‘approval bilaterals’ under the EPBC Act to the States and Territories. There will be no independent umpire to rule on inappropriate developments and threats to matters of national environmental significance. Now as never before Wildlife Queensland needs your voice to speak out against this ongoing onslaught on our environment and its wildlife. Please make a submission.