Queensland missing out on new national parks due to chronic underfunding 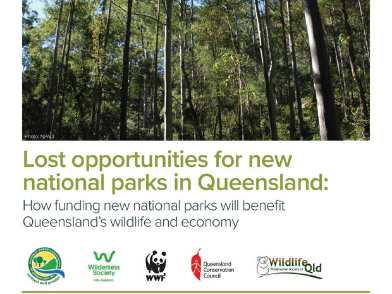 Click the image above to read the full report.

Five Queensland conservation groups have identified 175 properties with very high biodiversity value that could have been bought and protected since 2015, but were not, because the Queensland government has not budgeted for new national park acquisitions to service its 2015 promise to greatly expand parks and other protected areas.

The ‘Lost opportunities for new national parks in Queensland’ report recommends ambitious strategic expansion of the national park system to save our unique wildlife, while also boosting the State’s nature tourism economy.

“Over the last five years, 175 properties with high conservation values have been ignored for acquisition as national parks. The report points out that the budget for acquiring new national parks and other protected areas has fallen by 65% over the last seven years. This is happening, or actually not happening, while the government is espousing its nature conservation credentials by committing to a target of 17% of the State being protected in line with the recommendation of the Conference of Parties to the Convention on Biological Diversity. The figure presently stands at 8.7%, the lowest of any State or Territory and less than half the national figure.

“This inaction is occurring at the same time the government is offering a number of national parks for private tourist resort development, a move that will further weaken an inadequate system of protected areas, making them more vulnerable to the effects of climate change,” Ogilvie says.

The report calls for $55 million a year to be allocated by the Queensland Government for the acquisition of land for new national parks, as well as a $56 million a year boost to ensure the expanded park system is well-resourced and managed.

The report was produced by WWF, National Parks Association of Queensland, The Wilderness Society, Queensland Conservation Council and the Wildlife Preservation Society of Queensland.