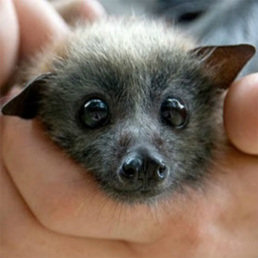 Four years ago (in 2008), the Queensland Government banned the shooting of flying-foxes after an assessment by the government’s Animal Welfare Advisory Committee found it was inhumane.

On Friday, amendments exempting flying-foxes from humaneness requirements under Queensland’s Nature Conservation Act 1992 will come into effect. This means fruit growers will once again be permitted to shoot flying-foxes despite the acknowledged cruelty and despite two of the species being threatened.

The decision to exempt flying-foxes from humaneness requirements stands in marked contrast to recent moves by the Government to remove exemptions for hunting of dugongs and turtles under animal welfare laws. At the time (19 June 2012), the Queensland Minister for Agriculture, Fisheries and Forestry John McVeigh said in a media release, “it’s important every Queenslander understands animal cruelty is never acceptable”.

Between 2002 and 2008 (after electrocution of flying-foxes was banned), permits were issued to shoot 3,000 to >5,000 flying-foxes each year. The carnage also included thousands of young who starved to death and many more probably shot illegally.

Shooting of flying-foxes was banned because there is an inevitable high rate of wounding (dark flying animals shot in the night), and because young flying-foxes (most born as orchard fruit is ripening) die of thirst or starvation when their mother is shot in an orchard.

Four flying-fox species will be affected: Grey-headed and Spectacled flying-foxes, which are listed as ‘vulnerable’ under national environmental laws (the Environment Protection and Biodiversity Conservation Act 1999), and Black and Little red flying-foxes.

Fruit growers can protect their crops much more effectively with nets, which can cost as little as $8,000 per hectare.

Quotes on the issue:

“Shooting has been demonstrated to be ineffective. Horticultural experts advise that netting is the only effective method to prevent significant economic loss.

“Killing listed species, particularly when population numbers are not known with any certainty, is a major concern. Where will it stop? What will be next?”

“What a terrible irony for Threatened Species Day. Shooting is the opposite of what is required to conserve Australia’s threatened flying-fox species.

“The Environment Minister says he is taking a ‘balanced’ approach. Species are listed as threatened when their future is in the balance, so what is balanced about shooting them?

“There is no excuse for it – fruit growers have cost-effective alternative methods of crop protection.”

“Even the hardest-hearted person who dislikes flying-foxes would be appalled at the suffering that results from shooting in orchards – wounded animals dying over several days and young starving to death.

“As Queensland’s Agriculture Minister has said recently, there is no excuse for animal cruelty. Humaneness requirements should apply to flying-foxes as much as any other wildlife.”

More information about the impacts of shooting.