In partnership with Moreton Bay Regional Council, Wildlife Queensland’s Richmond Birdwing Conservation Network (RBCN) held a vine planting workshop for bush care volunteers and Land for Wildlife property owners in the Moreton Bay Region at the Samford Eco-Corridor bush care site on 11 April. Attendees were given birdwing butterfly vines for planting on their properties. The vines were provided by RBCN, generously funded by a Bank Australia Impact Fund grant. Thank you to everyone who participated in this wonderful day.

To find out more about our work to recover the vulnerable Richmond birdwing butterfly and how you can help, head to the Richmond Birdwing Conservation Network web page.

Wildlife Queensland Projects Manager Matt Cecil joined a great lineup of speakers at the ‘NaturallyGC – Bringing Back the Richmond Birdwing Butterfly’ workshop on 17 April, delivered by City of Gold Coast. Matt enjoyed talking to a very engaged audience about the work of Wildlife Queensland’s Richmond Birdwing Conservation Network to help recover the vulnerable Richmond birdwing butterfly and how community members can get involved. Thank you to City of Gold Coast for organising a fantastic, fun and educational event and for helping to raise awareness of this threatened species. 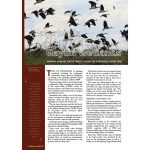 Wildlife Queensland was hard at work installing nest boxes in the Logan region in April as part of a project funded by Logan City Council to provide habitat resources for vulnerable greater gliders in the Logan local government area. 20 boxes were installed and two pole-mounted infrared camera monitors were attached to the outside of two boxes, for 24-hour wildlife monitoring.

The first of a series of three free greater glider workshops will be held from 3.00 – 5.00 pm on Saturday, 29 May at Priestdale, Queensland. Head to the Eventbrite page for more information and to register for the workshop.

PlatypusWatch and eDNA in the Dawson River

Wildlife Queensland’s PlatypusWatch Network is gearing up to take its platypus environmental DNA (eDNA) project to the Upper Dawson River region later next month. The ‘PlatypusWatch and eDNA in the Dawson River’ project, proudly supported by the Queensland Government’s Queensland Citizen Science Grants, will combine community-based observation surveys and environmental DNA (eDNA) surveys to document the population distribution of platypuses within the Upper Dawson River and tributaries around the Taroom Region.

Wildlife Queensland’s Upper Dawson Branch and platypus ecologist Tamielle Brunt will be running two workshops, one in Taroom and one in Theodore, for interested community members who would like to learn about platypuses and participate in the project. The workshops will be followed by a community-led observation survey of the Dawson River where participants will search for platypuses, and water sampling.

If you live in the region and would like to learn about platypuses and participate in this exciting project, please email us at platypus@wildlife.org.au. Stay tuned for workshop details coming soon!