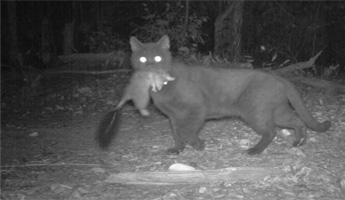 Our Queensland and Commonwealth governments have both proven their focus on certain aspects of biosecurity with new funding being committed to meet the challenge.

The Palaszczuk government is to be commended for honouring yet another of its pre-election commitments by providing $5M over the next three years to support additional initiatives to address wild dog and feral cat control in Queensland. The state government is building on community efforts to date and has elected to bring stakeholders from government departments, industry groups and the conservation sector together to oversee the development and implementation of the program. Wildlife Queensland appreciates having a voice at the table along with the Queensland Conservation Council.

The focus in part on feral cats is long overdue. The Commonwealth Minister for the Environment, Hon Greg Hunt, appears to be particularly frustrated by feral cats, with a desire to see 1,000,000 culled this financial year. With an estimated 20,000,000 feral cats in Australia, the objective does not appear overly challenging; however, even if achieved it would do little to address the overall issue. Shooting alone is not the answer: a cost effective approach which does not put native wildlife in harm’s way must be found.

The Queensland government aims to maximise the benefits of the allocated funding by targeting key agricultural and environmental areas with high wild dog and/or feral cat populations. In addition, funding will be directed towards evidence-based projects which provide accountability.

The Queensland government initiative will certainly complement the funds recently allocated by the Commonwealth government for feral animal and weed control in drought declared areas as part of the Australian Government Drought Assistance Funding.

Unfortunately however, it has not been all good news on the biodiversity front in Queensland, with recent outbreaks of melon blight and Panama disease in bananas triggering a review of Queensland’s biosecurity capacity and capability. Furthermore, biosecurity staff was not quarantined from the savage employment cuts under the Newman government.

Yellow crazy ants in the Wet Tropics and red fire ants in south-east Queensland and sometimes elsewhere require immediate and urgent attention. Myrtle rust is on the march, causing environmental harm to myrtaceous species along the coast and even inland.

Turning our attention to the Commonwealth arena, the Biosecurity Bill 2014 passed the Senate in May and was a significant opportunity lost, in Wildlife Queensland’s opinion, to afford Australia the best possible legislation. In the Senate, Labor joined with the Coalition government, and the environmental amendments being pushed by the Greens never saw the light of day. What amazes Wildlife Queensland is how the Bill passed without amendment. That very same day the Senate Inquiry into environmental biosecurity (with its 26 recommendations rejecting the government’s view that environmental biosecurity is well managed) was tabled.

The recommendations advocated that the Commonwealth work closely with its states and territories to revise the National Environmental Biosecurity Response Agreement addressing a number of issues, review Australia’s Biodiversity Conservation Strategy 2010-2030 with a focus on targets and how they are measured, address the need to better target known areas of biosecurity risk, and work towards better science, stronger enforcement activity, enhanced data bases, and the list goes on.

Why some of these issues were not addressed more adequately in the legislation is puzzling. However, the Bill did expand quarantine and biosecurity response powers, with regard to ballast water in particular, which is a positive. And regulations which define the operations of the Biosecurity Act 2015 will be developed over the next 12 months, so there is scope to attempt to influence this process and its outcomes.

To end on a positive note, a Threatened Species Summit will be held in Victoria at the Melbourne Zoo on 16 July 2015. It is understood that State and Commonwealth Ministers will meet prior to the Summit to discuss, and hopefully agree on, feral cat action and a fast-tracked threatened species strategy. Discussions are to be focussed on working together and partnerships, innovation and new approaches as well as practical action. While attendance of the Summit is by invitation only, Wildlife Queensland trusts that positive outcomes to benefit the environment and our wildlife will evolve.

With the past focus of pest and invasive plant biosecurity having been centred on primary industries – this undoubtedly will always be the case – Wildlife Queensland welcomes the attention now being given to environmental biosecurity. Current legislation and its enforcement is simply not working – our biosecurity capacity must be strengthened. The apparent change in direction is an encouraging step.