The aquatic, egg-laying platypus is one of Australia’s most bizarre and iconic mammals. Unfortunately, its habitat in Queensland has shrunk by 27 per cent over 30 years, and its numbers are declining. To counteract these threats, PlatypusWatch is a community-based program that raises awareness of platypus conservation and gathers population data from Queensland waterways so researchers can identify where actions are needed — now and in the future — to protect this very special monotreme.

dollars to sample each site

Formed in 2003, PlatypusWatch is a central hub for coordinating research into this fascinating species. In 2016, Wildlife Queensland launched PlatyCount — the first statewide platypus distribution census since 2001. Our Platypus eDNA Project also began in 2016, and our researchers now use environmental DNA (eDNA) sampling of waterways along with more traditional surveying methods to document and map platypus distribution and abundance in South East Queensland.

PlatypusWatch also aims to reduce one of the biggest problems platypuses face: human ignorance. People are often unaware their actions affect wildlife living nearby. Our publications, workshops, webinars and citizen science events raise awareness of the factors that result in platypus declines, including: 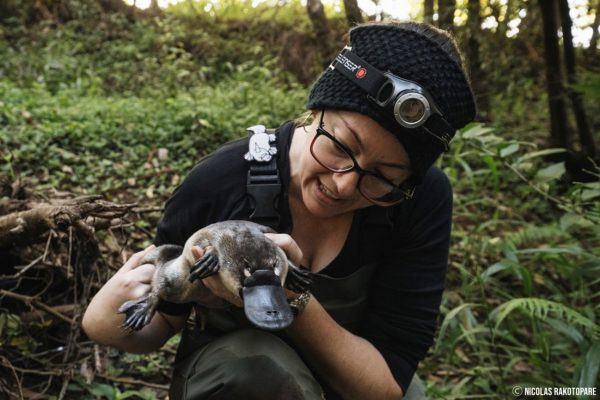 Tamielle Brunt with platypus Pollyanna. Continued monitoring and up-to-date observational records are crucial for determining fluctuations in platypus numbers and distribution over time, whether temporary or permanent. 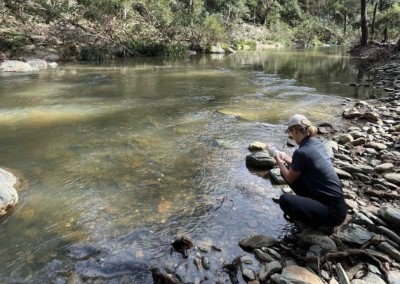 The above projects complement PlatypusWatch’s ongoing efforts to conserve the platypus, including:

Join our network of volunteers and citizen scientists who help protect and conserve the iconic platypus.

Support our work by symbolically adopting a platypus for a year with a $60 tax-deductible donation.

On Sunday 28 November, some 45 wildlife-lovers joined PlatypusWatch at Canungra for a Community Workshop talk and hands-on learning session to find out more about platypuses, bushfire recovery, and waterbugs.

END_OF_DOCUMENT_TOKEN_TO_BE_REPLACED 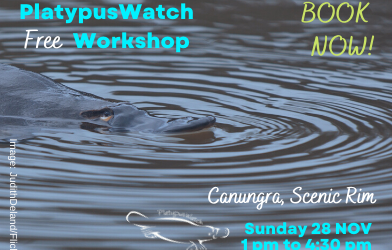 Come along to Wildlife Queensland’s FREE PlatypusWatch workshop and community talk at Canungra to learn more about the iconic platypus, environmental DNA, bushfire recovery, waterbugs – and how you can help!

END_OF_DOCUMENT_TOKEN_TO_BE_REPLACED 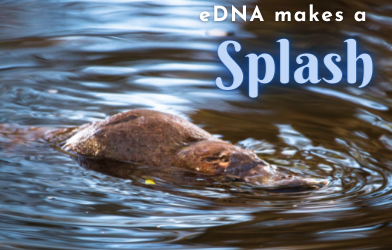 Environmental DNA Makes a Splash in the Upper Dawson

Wildlife Queensland’s PlatypusWatch program can now proudly reveal the much-awaited results of eDNA sampling at sites along the Dawson River and tributaries earlier this year.