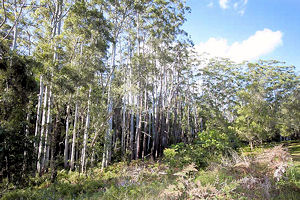 Wildlife Queensland is opposed to environmental offsets as a mechanism to permit development in places where it should not occur.

It is an established fact that our natural environment is in a declining condition, with our flora and fauna being subjected to many threatening processes (Natural Resource Management Ministerial Council 2010, Taylor et al 2011, Department of Environment and Resource Management, 2010). Wildlife Queensland strongly supports ecological, sustainable development (ESD) principles that strive to balance this kind of development with social needs and biodiversity conservation. Against this background we are opposed to offsets as a mechanism to permit development in places where it should not occur.  However, given the government’s decision to proceed, we make the following comments.

Acknowledging that the current government appears not to support ESD principles and permits environmental damage that continues to put our wildlife and its habitat at risk in the name of development, an offset policy has a place. In fairness, governments of all kinds have endorsed the use of offsets. Environmental offsets were introduced to Queensland in the 1980s allegedly to counterbalance ‘unavoidable’ environmental impacts. Since that time, policy and guidelines have gone through a number of changes and amendments, initially to strengthen such policies but most recently to weaken them.

Any such policy to obtain qualified support must not only address but enhance biodiversity values at the landscape scale as well as ensure protection of ecological processes and services. Such policy should be triggered by the impact on any one species and not restricted to those that are listed as endangered or in other high-risk categories. Cumulative impacts many change the conservation status of species. There are several species known to be endangered but not listed as such, including plant species Kelita uncinella found near the Newlands Coal Mine northwest of Brisbane near Glenden. It is well established that this species should be listed as endangered. Similarly, endangered status should be the correct listing for Cycas couttsiana which is known from only a few localities including the White Mountains Resource Reserve. On the other hand, rasp weed (Gonocarpus urceolatus) was delisted, saving QGC some angst.  Unfortunately the review of the conservation status of species is lagging in real terms. Until this is rectified floristic surveys of all potential development sites should be mandatory.

Another concern under proposed legislation is that the status assigned to a proposed development may exempt such development from the need to provide offsets. While it could be assumed that the Coordinator General would impose offset conditions, it is at his/her discretion. Allegedly the new Bill provides a test of significance when considering the environmental impacts of a development. Unfortunately the definition of ‘significance’ can be called into question. The area of a proposed development should not be a criterion which triggers or invokes the offset policy.

Under existing legislation the three levels of government may require separate offset arrangements as the impact may be on matters of either national, state or local environmental significance. This is positive and certainly has benefits for the environment. A review of various approvals would undoubtedly reveal differing demands from the various levels of government. Wildlife Queensland is very concerned about the current attitudes being displayed by the Commonwealth and State Governments about devolving powers under the EPBC Act with the Commonwealth walking away from their environmental responsibilities. The intention to adopt a one-stop approach is opposed by Wildlife Queensland as undoubtedly, the environment will be the loser. Above all, there must be a demonstrated positive gain for conservation and biodiversity protection. These criteria should be the driving force for any offset approval.
There is not strong opposition to the option of a sum of funds to strategically acquire vegetation offsets that give a positive, long-term gain for conservation.  One of the major concerns is that without appropriate planning a multiplicity of ‘alleged’ protected areas with significant management challenges could arise with little overall benefit for biodiversity. Our concern, particularly in south-east Queensland, is that offsets will be difficult to locate. Not only will locating sites be a challenge, but most are already occupied by existing fauna. Furthermore, translocation of fauna frequently has a less than desirable outcome.
Funds to enhance and expand the protected area estate may be a preferred alternative so that long-term management can be guaranteed. An independent appraisal of the impact likely to be caused to the environment and its wildlife by any proposed development must be undertaken.  Consideration must be given to how such impact can be avoided, or at least mitigated, prior to the consideration of approval being given. Triggering the offset policy must be a matter of last resort.

However, all is not lost and the proposed new Bill addressing offsets does have some positives. Wildlife Queensland is encouraged by the enhanced investigation powers included but remains concerned about the capacity of Department of Environment and Heritage Protection (DEHP) to enforce them. Only recently the Auditor General of Queensland was highly critical of the DEHP’s performance in enforcing, or even reviewing compliance with, conditions imposed on developments particularly in the mining sector. We agree with a strong penalties regime that ensures compliance with the rules and obligations of the policy.
Wildlife Queensland has many concerns about offsets policy and the proposed new legislation, with particular reference to some of the definitions used and the inconsistency with Commonwealth legislation. The definition of ‘conservation outcomes’ in particular is totally inadequate. The proposed legislation in Queensland offsets will not apply to major projects, objects do not reflect ESD principles, residual impacts apparently are not considered and apply different offset ratios. There is no minimal offset equivalence set and a maximum ratio of 4:1 is proposed.  Science alone should determine what offsets are required. Wildlife Queensland is of the view that an independent body should assess what offset is required, and that an offset equivalent to that destroyed or impacted is totally inadequate. There must be a further, readily demonstrated gain for conservation.

The three aspects of particular concern to Wildlife Queensland include: