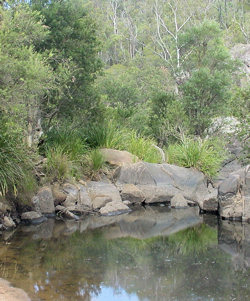 The Hon Steven Dickson MP, Minister for National Parks, Recreation, Sport and Racing introduced this Bill into the Legislative Assembly on 13 November 2012. The Bill has been referred to the Health and Community Services Committee for consideration and a report back to Parliament by 2 February 2013.

The Committee is calling for submissions with a closing date of 19 December 2012. A copy of the Bill and relevant documents can be located on the committees website.

In reality what this does is open up national parks for permanent commercial tourist infrastructure for long term leases and reduces potential control over state forests.

While not intended, there is a potential for our limited areas of national park to be exploited for other infrastructure attacking the primary purpose of national parks – the protection and conservation of our biodiversity. Exclusivity for the high paying guests and clients will be the order of the day. It is difficult to imagine that for privacy and comfort of guests the public will not be restricted.

Of course we can only surmise and speculate as the legislation has been introduced and will be debated but the compliance framework, associated policy and guidelines are yet to be developed or at least made public. A great reliance is being placed on experience in Tasmania, New Zealand and United States of America. However none of these areas have less than 5% of their land mass set aside for national parks – and much more in most cases.

Currently the national parks and our special places play a significant role in the tourist industry. People engaged in nature-based tourism have acquired land adjacent or near by to appropriate national parks. Why should land acquired for conservation purposes be given freely or at minimum cost to attract the big end of town?

Other changes to the Nature Conservation Act are but a start to the watering down of the legislation. From all accounts tenures are to be modified and the cardinal principle of management that has served adequately for over 50 years will be under attack. The very act of introducing these changes and removing national parks from the Environment portfolio shows a lack of understanding of their role.

As for the changes to the Forestry Act there is little to be gained. Further fragmentation of the forest is most likely and there is a potential loss of control as this Government has shown little interest in compliance activities in a range of areas. Vegetation will be modified with more threat to what remnant vegetation remains endangering habitat for our wildlife.

Wildlife Queensland encourages you to forward a submission to the Health and Community Services Committee, Parliament House, George Street, Brisbane. Queensland 4000 or by email.

We suggest you send copies to your local member and the Premier, PO Box 15185, City East, Queensland 4002 or by email via the website.