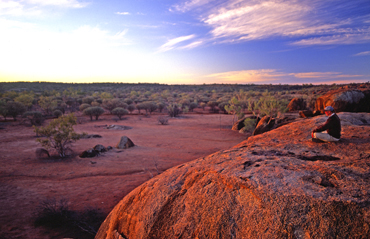 It’s been a long time coming but the milestone has finally been achieved: National Park Estate areas in Queensland now

exceed five percent of the state. The Palaszczuk government is to be commended on gazetting some three properties – Boorara, Werewilka and Oolamon – as part of Currawinya National Park in the state’s south-west. These properties total some 189 000ha bringing Currawinya National Park to an approximate total of 344 000ha and making the park one of Queensland’s largest.

These new areas, purchased by the previous LNP government for national park purposes, include the upper catchments of creeks that feed the RAMSAR listed lakes and wetlands of the original national park section. They also capture a network of active artesian springs and significant examples of Indigenous cultural heritage. Heading north from the original Currawinya section the landscape becomes drier and more rugged from the sandy floodplains to the low hills and escarpments of the Werewilka and Oolamon sections.

Reaching the five percent milestone, however, does not afford our state government the luxury of resting on its laurels – much more must be done. Twelve holdings purchased between 2010 and 2012 await gazettal. These ‘future’ parks make up some 400 000ha in total and are located in regions where national park coverage is low. Their gazettal is urgent and action is required.

Wildlife Queensland suggests budgetary provisions of at least $20M for new national park acquisitions in the 2015-18 term of state government. Furthermore, additional funding for management is required. Queensland governments of all political persuasions have long provided less funding for the management of its national park estate than governments of New South Wales, Victoria and Tasmania.

The Palaszczuk government made a pre-election commitment to restore the cardinal principle of management. The cardinal principle for managing national parks is to provide, to the greatest possible extent, for the permanent preservation of the area’s natural condition and the protection of its cultural resources and values. Natural condition means protection from human interference-allowing natural processes to proceed. Though Wildlife Queensland is well aware of the Palaszczuk government’s honouring of its pre-election commitments and, on occasion, going beyond, the Society would welcome action in this area.

Cattle grazing continues within many of our national parks. Minister Miles has indicated that this is not what national parks are for but action beyond words is required. There is no doubt that cattle disperse weeds, destroy understorey vegetation and can have negative impacts on native fauna.

Of further concern is the apparent increase in the number of non-passive commercial activities allowed in our national parks, areas designated primarily for the conservation and protection of flora and fauna and secondarily for people to enjoy and commune with nature, leaving only their footprints and taking only their memories.

While national parks will always be the cornerstone of biodiversity conservation, their existence alone will not arrest the established decline in our biodiversity. Granted, Queensland’s national park estate is increasing, but it is highly unlikely that the rapid dynamic growth of the late 80s and early 90s from two percent to almost four percent will ever be seen again.

Required now is growth in the entire protected area estate. Bligh’s government in 2010 set a target of 20 percent of Queensland by 2020. In recent times the most significant increase in the protected area estate has been in the Nature Refuge category. In November 2012 the area under nature refuge tenure was 3.335Mha. As at June 2014 the area had increased to 3.887Mha and was anticipated to grow by a further 0.389Mha by June 2015.

While the expansion of the nature refuge has merit, such tenure may to be subject to mining and development pressures. Wildlife Queensland is of the view that at least three categories of Nature Refuge should be implemented: one being equivalent to national park status, where the prime purpose is the conservation and protection of biodiversity; a second where complementary industry or use may continue together with the conservation focus: and a third category resembling the current situation.

The rationale being that retrospective legislation is difficult to enact. Each of these categories would have defined management strategies. Furthermore, if nature refuges were not subject to ATPs or mining leases perhaps landholders would be more likely to make their land, or portions of it, available for conservation.

A second strategy to assist in arresting biodiversity decline would be the requirement for regular audits of nature refuges with a view to ensuring compliance with the terms of the agreement, particularly in cases where the landholder is the recipient of any grant funding.

A third strategy would involve support for non-government organisations investing in conservation. The Bush Heritage Foundation is well on its way to achieving one percent of Australia by 2025. The Australian Wildlife Conservancy has doubled its holdings in Queensland. And even the Wildlife Land Fund Limited – established, fostered and promoted by Wildlife Queensland – has slightly over 1850ha under management. There is no doubt the private sector has increased its investment in conservation areas.