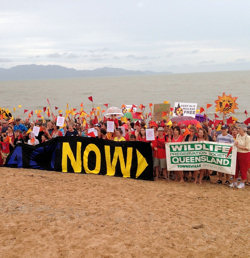 The temperature is rising – but we are rising too!

So rang the chant as hundreds rallied on Townsville’s Strand for the national day of action on climate change on Sunday 17 November. A goodly number of Townsville Branch members and friends were among the crowd and after a hasty search for the Branch banner (whose bed was it last stored under?) we made sure that Wildlife Queensland’s name was very much to the fore – even if at times the blustery conditions threatened to make us airborne.

Wendy Tubman and her hard-working team from NQCC and the Youth Climate Coalition pulled together a great event with expert speakers such as internationally renowned coral ecologist Dr Katharina Fabricius, and JCU Professors Simon Robson (Centre for Tropical Biodiversity and Climate Change) and economist Natalie Stoeckl (Cairns Institute). Dr Lynne van Herwerden presented information from Doctors for the Environment and Magnetic Island school student, Saskia Logan, have us a youth perspective and plea. Branch President, Liz Downes, was among those interviewed by Channel 7, focussing on the impact of climate change on wildlife, ecosystems and habitats as well as on humans. Top local band Hallelujah Baby wrapped up the gathering before we chanted and marched our way along the beach.

According to ABC online, ‘tens of thousand of Australians turned out for climate change rallies across the nation, calling on the Abbott Government to keep the carbon tax. Organisers say about 60,000 participated at the rallies, which were held in capital cities and more than 130 towns and regional centres. Emergency workers played a significant role in warning about the dangers of unchecked global warming, while Labor and Greens politicians, along with climate scientists, also participated.’ (ABC Sun 17 Nov 2013, 8:07pm).