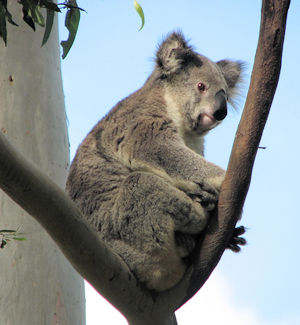 In 2013, the Commonwealth Government released a document, a

draft of referral guidelines about vulnerable koalas, to be applied to the Environmental Preservation & Biodiversity Conservation (EPBC) Act for comment. Due to our ongoing activity – Wildlife Queensland has had an interest in the welfare and maintenance of koala populations since the late 1960s/early 1970s and has lobbied governments for enhanced management of the koala since then – we were asked for our opinion on these referral guidelines and availed ourselves of the opportunity.  Comments closed on 7 February 2014. Wildlife Queensland is of the opinion that there are numerous positives within the referral guidelines but also a range of issues that need to be addressed.  It appears that while the new referral guidelines for the EPBC Act in relation to vulnerable koalas will be successful on many fronts, there is still room for improvement.

Wildlife Queensland commends the referral guidelines for recommending the collection of baseline data, with each referral utilising a combination of desktop and on-ground surveys to achieve this goal. This will lead to a more comprehensive understanding of koala population dynamics on potential development sites.

The referral guidelines correctly require that accurate mapping of koala habitat be provided when a referral application is made. This will allow the government to see whether the potential development will impact wildlife transportation corridors or irrevocably damage prime koala habitat.  The guidelines also put in place steps to ensure that reviewing and monitoring of referral application sites is established and followed through, ensuring management strategies are effective and compulsory conditions are met.

In addition, the referral guidelines address and employ mitigation methods to deal with diseases and threats to koalas including Chlamydia, dogs, traffic and koala retrovirus. This will help to catch outbreaks of diseases affecting the koala population and abate the threats posed to the koala’s livelihood by anthropological influences. It would be inappropriate not to welcome the Queensland government’s funding of research into diseases impacting koalas – particularly Chlamydia & Retrovirus – and commend it for distinguishing and categorising the main variations of koala habitat; realising that different threats require different recovery objectives.

However, there are multiple issues that the EPBC Act referral guidelines for the vulnerable koala fail to address adequately. Wildlife Queensland feels that the guidelines should implement a requirement for detailed mapping of the koala’s entire habitat, not just for surveying on potential development sites, so that changes in koala population and density can be mapped and potential causes of shifts in koala populations may be more easily identified. This would need to be done in a way that took other development proposals into account, so that cumulative damages to the koala’s environment didn’t end up restricting its habitat area to a point where genetic diversity was lost.

Wildlife Queensland advocates an increase in the amount of high-quality koala habitat available, and being aware of the koala’s entire habitat range would be an impressive first step towards achieving this goal.  Undoubtedly, this is a loftier and more biodiversity-friendly goal than the referral guidelines recovery objective which only aims to maintain large areas of koala habitat surrounding habitat refuges – far too low a bar to set for a creature which is a national treasure and Australian icon.

Numerous definitions of technical words within the referral guidelines come across as jibber-jabber, failing to be clearly defined. If left unaddressed, loopholes and corner-cutting may result, allowing applicants to weasel out of submitting full proposal referrals to the government. Wildlife Queensland would like to see more clearly stated and better defined definitions to ensure the most accurate review of referrals to the government from all potential developers.

Furthermore, Wildlife Queensland highly recommends the Spot Assessment Technique (SAT) to identify the tree species that koalas prefer, while the referral guidelines list the SAT as an indirect observation method best implemented in dry conditions, preferring direct observation methods such as on-ground surveys in conjunction with desktop surveys. Should such a tried-and-tested method, acclaimed for wide-spread results, be taken so lightly?

The Commonwealth’s inadequate coverage of how climate change may potentially influence the koala and its natural habitat alike also concerns Wildlife Queensland, especially as it is widely known that a rise in average global temperatures of only a degree or two may be enough to shift the entire range of habitable area for koalas and koala populations southward towards cooler climates. Climate change may also result in more erratic weather behaviour, resulting in an increase in natural disasters such as bushfires and floods. Further insurance measures, such as the removal of fire hazards including introduced grasses, need to be put in place to limit the devastation to koalas when a flood event occurs. If koala populations don’t adapt to climate change caused by anthropogenic influences, a massive population drop may be imminent. Shouldn’t further steps be taken to preserve an Australian icon from humanity’s impact upon the planet?

The demise of the koala population has not been restricted to the urban expansion of South East Queensland. Allegedly, the koala population of the Mulga Lands in western Queensland has been reduced to 20 percent of its 1990 levels. Certainly, this demise in the Mulga Lands is not due to urban expansion and traffic kills. Similar stories about significant declines in central Queensland regions also abound. Are various diseases the major threatening process? Is the habitat being impacted? Are existing corridors being fragmented causing isolation of koala populations? Monitoring of koala populations needs to commence now, and all existing data needs to be collated.  Work on addressing the various diseases must continue, all in an attempt to address the challenge of the diminishing koala.

However, is it too little, too late? The Government at all levels has known what to do to ensure a sustainable coexistence between koalas and humans for decades, yet has chosen instead to prioritise anthropological development over the protection of prime koala habitat and the preservation of a national icon. Wildlife Queensland lives in hope that appropriate action will be taken before it is too late. Our children’s children should have the right to view the koala in the wild.