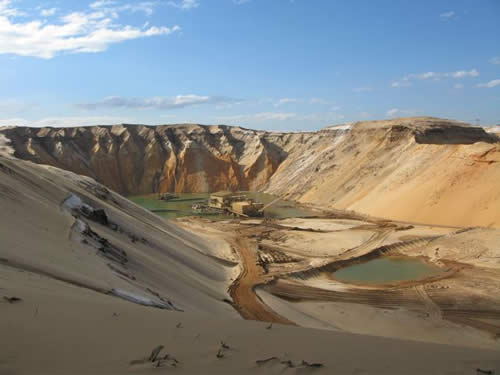 In yet another blow for the environment, sand mining is to continue until 2035. The Newman Government’s legislation that winds back

the hard fought for environmental gains under the previous Government will not only impact the environment and its wildlife but undoubtedly will further suppress the Quandamooka people’s native title rights and interests. Under previous legislation mining for all practical purposes would cease in 2019.

The North Stradbroke Island Protection and Sustainability and Another Act Amendment Bill 2013 was introduced to the Parliament on 17 October 2013 and referred to the Agriculture, Resources and Environment Committee (AREC). The AREC reported back on 14 November 2013. The Bill was listed for the second reading on 20 November 2013.

The report from the AREC contained two recommendations and a point of clarification. AREC recommended that cooperation and proper planning occur across all levels of government as well as consultation with Traditional Owners, residents and other businesses to assist in the transition from mining to other incomes. There is a suggestion for the Minister to inform the House how the offset policy will operate and the arrangements that will be put in place for its operation between the relevant departments. While the Committee recommended the Bill be passed dissenting reports were tabled by two members, Ms Jackie Trad MP and Mr Shane Knuth MP. Both dissenting reports referred to lack of consultation and scrutiny. It was suggested that this current legislation had the potential to compromise public perception of the integrity of the government and by association the Parliament. It is a well reported fact that Silbelco, the Belgium owned company undertaking the sand mining on Stradbroke Island, spent significant funds on PR during the last election. Ms Jackie Trad MP stated in her dissenting report “this bill has all the hallmarks of a morally corrupt ‘cash for legislation’ deal.’’

Wildlife Queensland made a submission to the AREC opposing the Bill. Major concerns included but were not restricted to the ongoing threat to biodiversity, potential harm of areas of high environmental significance, potential loss to future national parks, the removal of certain environmental safeguards, further fragmentation of vegetation, questionably capacity to re-establish ecosystems not simply revegetate areas, disturbance of hydrological systems and processes and threats to international wetlands that are designated a RAMSAR site. While Wildlife Queensland has no rights to speak on behalf of the Quandamooka people, we strongly support their rights. Their aspirations and goals should not only be listened to but acted upon. Wildlife Queensland’s submission was only one of 122 publicly available submissions of which 75% opposed the legislation.

It appears the almighty dollar is king yet again. There is no clear business case that the people of Queensland will in fact be the benefactor of this legislation. It is certain that Sibelco, a company still involved in court action, will benefit economically. An argument for the extension of the mining lease until 2035 is that this time period is required to transition the economy from mining to other sectors. Unfortunately there does not appear there is any independent study to support such claims currently available.

In recent correspondence the Premier, Campbell Newman, stated ‘The Government appreciates the importance of the environment to all Queenslanders and is committed to finding the right balance between the environment, population growth and economic development.’ Wildlife Queensland appreciates that actions speak louder than words. Apart from the decision to save Swan Lake from being turned into a car park by the Port of Brisbane Authority and the recent protection afforded to the Steve Irwin Wildlife Reserve and the Wenlock River in Cape York, the great majority of decisions by the Newman Government certainly do not support the Premier’s words and his Government’s care for the environment.