Marsupials hold a certain notoriety in the animal kingdom. Characterized by premature birth and continued development on the mother’s lower belly, marsupials make up most of the native mammals found in Australia. Over 40,000 years ago, many of Australia’s marsupials were megafauna, very large animals, usually over 40kg in weight and generally at least 30 percent larger than any of their extant relatives. 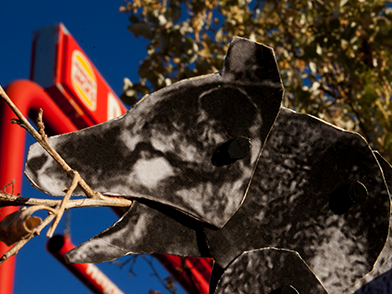 I felt that if I could reintroduce these species as giant puppets into contemporary urban settings, people might pay a little more attention to one of the most unique stories in all of natural history.

I was interested in Australian animals from a very early age, but growing up on the west coast of North America, I couldn’t just step out onto the back veranda at night and see a possum. Twenty years on though, I live here, and as an artist, the animals of this continent form the central focus of my creative practice.

My original goal upon arriving here in 2012 was to make The Australian Mega Fauna Project, a stop-motion animated documentary concerning the lack of mega fauna in popular Australian culture. I felt that if I could reintroduce these species as giant puppets into contemporary urban settings, people might pay a little more attention to one of the most unique stories in all of natural history. I threw myself into the project and chased the story around the continent.

It started with making animations and doing field work in remote areas alongside some of Australia’s top paleontologists and ancient DNA researchers. It then progressed to holding exhibitions internationally and launching public art initiatives that not only allowed me to realise the visuals for the project but also gave me the chance to share it with school children.

Now, five years later, I have a body of work that is rich in character and has some of the key ingredients to a story just as Australian as Anzacs, Victoria Bitters, and Vegemite.

The next chapter of the project will be launched in Brisbane and concerns the lineage of the living koala. Similar to the Tasmanian tiger in that it is the last living member of its taxonomic family, the koala has a diverse lineage that includes many distinct species ranging in size from the miniature litokoala and perikoala up to the robustly built phascolarctos stirtoni.

‘Stirt’ weighed in at approximately 30kg and fossil evidence suggests that it existed alongside the extant koala phascolarctos cinerus. Due to climate change and inadequate legislation to protect them, the living koala is in a perilous situation. The current socio-political gridlock between multinational developers, conservation groups, and local government has resulted in a critical decline of this iconic species in South East Queensland.

As an artist with a passion for Australian animals, I feel it is my role to tell the story of the koala’s prehistory and to highlight the urgent need to work together to ensure the future of this iconic native species.

If you’re in Brisbane, keep a lookout in the tree tops of your community – the original ‘drop bears’ are coming back!