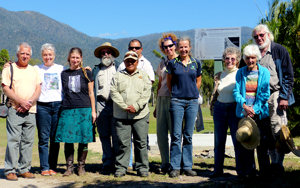 This year has seen the Tully Branch forge very productive

partnerships with many other NGOs, private enterprise and the local Council. The post Yasi opportunity to secure more habitat for the Glider has been the main thrust and involved the cooperation of State Departmental officers, Forest Managers, Terrain staff, Council Nursery staff, Conservation Volunteers Australia and WPSQ members.

Negotiations regarding the planting of corridor trees to enable connectivity between remnant patches of native forest for mahogany gliders are continuing on a positive note.
The talks, between Hancock Queensland Plantations and WPSQ members, have been in operation for some 12 months and are progressing at a steady rate, according to Tully branch secretary, Lawrie Martin: ‘Forestry company representatives have been most helpful and, like us, are confident of a sensible outcome being reached for the benefit of mahogany gliders – and other native animals – before the deadline arrives.’

And most interesting of all:

WPSQ Tully president Sue Smith said the most welcome gesture from people in a far-off land was like ‘….. hands reaching across the sea … and clearly displayed people worldwide were feeling for all the endangered animals put under threat by human activity.’

Home is where the hollow is …

Did you know that Queensland is home to all six of Australia’s glider species?

… would you like to help us keep it that way?

This Christmas, consider a gift that gives twice – Wildlife Queensland is asking you to ‘Adopt a Glider‘ for someone special and support conservation efforts to assist the endangered mahogany glider and other glider species.