LOLA Bill another blow to the environment – May 2014 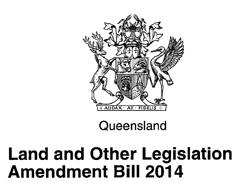 wildlife. Wildlife Queensland is not opposed to legislation that reduces red tape and duplication, and in fact encourages the review of legislation as circumstances and situations change. However, such reviews must be subject to broad consultation with the community and provide opportunities for interested parties to air their views. This did not occur on this occasion. This legislation weakens environmental protection in the name of enhancing investment opportunity and security of tenure for the state’s leasehold estate. Wildlife Queensland along with other conservation-focused organisations opposes the bill.

The bill under review addresses a broad range of issues including land reform, the taking of water and water licensing, aspects of high density development, amendments to the Native Title Act, public and environmental purposes for which land may be acquired and matters relating to the petroleum and gas industries.

Surprisingly only 16 submissions were formally presented to the State Development, Infrastructure, Industry and Planning Committee of the Queensland Parliament charged with reporting to Parliament by 13 May 2014. Of those submissions, six were critical of, and/or opposed to, at least certain aspects of the bill. As this is significant legislation, Wildlife Queensland was amazed that more of a response from the broader community was not received. No doubt there are many reasons for such low submission numbers but from our perspective, two come readily to mind.

This bill is based to a large degree on previous consultation carried out in the early days of the Newman Government and, although it has significant implications for Queenslanders, the legislation is being rushed through parliament. It was first read in parliament on 19 March and referred to committee. Submissions closed on 4 April and appearances before the committee occurred on April 10. Wildlife Queensland is aware of organisations that requested extensions for submissions and were rejected.

The other possible reason for so few submissions is a sense of powerlessness. When the impact of submissions on legislation introduced under the Newman Government is reviewed, it can be seen that little change has been achieved. Perhaps many are simply giving up.

While Wildlife Queensland has an interest in many of the issues addressed under the bill, there are other organisations far more qualified to provide comment on certain aspects. Wildlife Queensland has no right to speak on behalf of Aboriginal and Torres Strait Islander peoples, for example, but strongly advocates that their interests and aspirations be adequately addressed. Judging from submissions, Aboriginal and Torres Strait Islander peoples do have concerns over aspects of the bill along with the apparent lack of consultation.

Wildlife Queensland focussed its submission on concerns regarding land tenure reforms, the Water Act and the apparent lack of consultation of the broader community on these issues.

When it comes to land tenure reforms, the introduction of rolling leases is of major concern. Based on the views of our membership, the idea to ‘live like you will die tomorrow but farm as though you will live forever’ is practiced by many but not by all. The introduction of rolling leases is a retrograde step for the environment and its biodiversity. The Newman Government has introduced some positive land management practices such as an enlightened approach to harvesting of mulga, but this bill has the capacity to drive land management in Queensland backwards.

On top of rolling leases, there is increased flexibility for lease amalgamations, a removal of restrictions that limit the number and type of rural leases that can be owned by individuals and corporations, the expediting of the conversion to freehold, and substantial changes to the ways lease rentals and state land purchase prices will be calculated.

The stated purpose of the reforms is to enhance investment opportunity and security of tenure of the state’s leasehold estate. Wildlife Queensland is of the view that the outcome of such a bill, if enacted, will be to reduce the state’s ability to control the future of an estimated 60 per cent of the terrestrial area of Queensland and at the same time, increase the property rights of many existing lease holders without an assessment, review or profit to the community.

The introduction of the rolling lease and related changes provides an extension process to replace existing procedures. Our reading of the bill indicates that the Minister for the Land Act must grant an extension when applied for, the application for renewal may be made at any time in the last 20 years, and the renewal is for the term of the original lease. Granted there appears to be a few limitations on when an application may be made and additional consent is required in a few defined circumstances, but the Minister has no discretion but to extend the lease.

Apart from the concerns raised, how do we ensure the long-term condition of the state’s agricultural and pastoral lands? This potential privatisation of the state has been developed with little to no public consultation of the likely outcome of the changes.

Another major concern for Wildlife Queensland is the fact that this bill is used to rectify legal deficiencies with regard to decisions made under the Water Act. The fact that mandatory statutory criteria were not followed should not be taken lightly as surely that is contrary to best practice and would be in conflict with the intent of the Water Act. In the explanatory notes, reference is made to confirming the validity of particular water licensing decisions and fixing minor drafting errors relating to the taking of water. Is the problem so immense that the applications cannot be re-examined and dealt with in accordance with existing legislation, instead of changing the law retrospectively so the decisions are validated? Wildlife Queensland would also be interested to learn whether an inquiry has been, or will be, held to determine how these errors occurred and more importantly, what steps have been taken to ensure such failures do not occur in the future.

Transparency and accountability are the cornerstones of good government. It is suggested that they were not valued on this occasion. Wildlife Queensland does not support legislation that weakens environmental protection in the name of enhancing investment opportunity and security of tenure for the state’s leasehold estate.  With the decline of biodiversity an unfortunate scientific fact and essential ecological processes under pressure, it is obvious that current strategies are not working and need to be enhanced rather than weakened. If this were not the case, Wildlife Queensland’s position on proposed changes may be different.