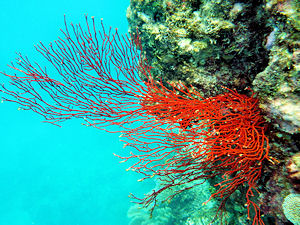 on 18 June 2014 was a huge win for the future of the Great Barrier Reef and the millions who united around the world in its passionate support. In the face of intense pressure, the World Heritage Committee held the line and put the Australian Government firmly on notice to take stronger action to protect the Great Barrier Reef or risk it being listed as ‘world heritage in danger’. To avoid the ‘list of shame’, the Australian Government has been told to address threats to the Reef from port development, dredging and dumping.

Wildlife Queensland congratulates WWF on a campaign effort that can only be described as outstanding. In the 24 hours prior to the Committee’s decision, it was shown just how determined people around the world are to protect the Reef. On 18 June WWF presented Reef campaigners’ votes to Kishore Rao, Director of the World Heritage Centre. Wildlife Queensland’s vote was handed over with the other 204 512 votes cast through YouNesco by people in 160 countries. At the same time, the #FightfortheReef social media storm rolled worldwide reaching more than 16 million people. Across the day, tens of thousands of messages were Tweeted and posted on Facebook, calling on the World Heritage Committee to fulfil its responsibilities. The FightfortheReef hashtag trended in Australia, the UK and Canada – and the wave of images and words was live streamed to delegates on huge screens that had everyone talking.

On March 25 2014 the Senate of the Parliament of Australia again endeavoured to come to the rescue of Australia’s environment and its biodiversity when it referred the management of the Great Barrier Reef to the Senate Environment and Communications Reference Committee for inquiry and report. Having recently held inquiries on offsets policy, Tasmanian Wilderness World Heritage Areas and the Environment Legislation Amendment Bill, the Committee has now turned its attention to the adequacy of the Australian and Queensland Governments’ efforts to stop the rapid decline of the Reef.

Submissions closed on 2 June with a report back date of 25 June. Wildlife Queensland seized the opportunity to make a submission and again lend its voice to the battle once thought won in the 1960s. The Committee’s scope of invited comment was certainly not limiting and Wildlife Queensland commends such an open approach. The Terms of Reference (ToRs) highlight a broad range of aspects including management of the impact of agricultural runoff, the application of the precautionary principle, resourcing, and addressing World Heritage Committee recommendations.

It was recognized back in the 60s that the battle for the Reef was far more than the Society could manage, and assistance was enlisted from the Littoral Society and the Australian Conservation Foundation. The fight to protect the Reef did not stop at Australia’s shores; the involvement of the International Union for the Conservation of Nature and other overseas scientific research bodies was sought. Although the threats are different today than those of 50 years ago, both are underpinned by a governmental desire for economic development rather than protection of this unique natural wonder.

Wildlife Queensland acknowledges that extreme weather events such as cyclones play a role in the decline of coral cover as does the crown of thorn starfish and coral bleaching especially on the mid-shelf reefs. However, it is less certain that such threats impact on inshore reefs and seagrass meadows to the same degree. It is known that the main water-quality threats include nutrients, pesticides and sediment loads from land via rivers and drainage lines.  Unquestionably, it is a combination of natural events and anthropological activities that is contributing to the well-documented decline in the health of the Great Barrier Reef that is leading to such concern.

It would be inappropriate to infer that the governments have done nothing to meet the challenge of reversing the trend or at least arresting the decline in the health of the Great Barrier Reef.  The Reef Water Quality Protection Plan (Reef Plan) has met with some success. The on-ground progress has been driven primarily by the Australian Government’s Reef Rescue program along with Queensland Government and industry-led initiatives. Progress towards the Reef Plan targets continues to show promise. Changes to agricultural on-ground practices appear to be having some impact. However, the potential cost of addressing point source sediment loads from either naturally eroding surfaces or from areas degraded as a result of inappropriate past practices would be so prohibitive as to restrict the likelihood of such action occurring. As a result much more time will have to pass before the reduction in sediment and nutrient loads are fully reflected in improved marine health.

While the Reef Plan was a good initial step, research must be addressing future requirements so that effective and efficient policies can be developed. For this to occur it is essential that ongoing monitoring continues. Current budgetary situations at both state and commonwealth levels appear to reflect little investment in such activities. This is short-term thinking from our perspective as, without a healthy Reef, the tourist industry will decline.

Up until the last few years, this natural wonder – the largest coral reef ecosystem on earth at 348 000 square kilometres and one of our richest and most diverse natural ecosystems – has been regarded among the best managed marine areas in the world. According to a report by Deloitte Access Economics1 the Reef’s economic contribution is about $7 billion per annum with the equivalent of 64000 total fulltime staff. The bulk of this contribution is attributed to the tourist industry and it is slightly lower compared to previous figures calculated for earlier years.

It is Wildlife Queensland’s view that should the management of the Great Barrier Reef be enhanced, the income from tourism would escalate over time as visitation increased to view the natural wonder – home to over 600 types of coral, over 1600 species of fish, 30 species of whales and dolphins, as well as jellyfish, sea snakes, worms, turtles, dugongs and birds.

The challenge from Wildlife Queensland’s perspective is that the cumulative impact of many of the threats arising from new initiatives and other activities that have been ongoing for a long period of time are unknown. This is when the Precautionary Principle should come into play. The total threats of the outcomes of initiatives taken to date must be given a change to materialize prior to initiating new activities with additional threatening processes in the name of development. Wildlife Queensland is of the opinion that prudent use of the Precautionary Principle has not been demonstrated by either the Queensland or the Commonwealth Governments.

One strategy for enhanced management of the Great Barrier Reef could be to ensure there is no duplication of responsibilities between the state and the commonwealth. This can be achieved without the commonwealth devolving powers under the EPBC Act as proposed to the state. Wildlife Queensland does have major concerns that the Queensland Government will fail to put national interests in the form of protecting Matters of National Environmental Significance (MNES) ahead of state interests, particularly if potential revenue is a likely outcome.

If potential threats to the Great Barrier Reef are examined, climate change is a major factor with its increased temperatures and more frequent adverse weather events. Unquestionably, coal mining industries and the use of the product contribute significantly to climate change. The development and expansion of ports to export the coal and associated shipping pose a huge threat to the Great Barrier Reef. Such action will require millions of tonnes of dredging to establish channels and docking facilities associated with the ports and then the dredge spoil has to be dumped. Dredging and spoil dumping have relatively well known potential impacts including degradation of water quality, changes to hydrodynamics, alteration of marine wildlife, removal of habitat, smothering of seagrass meadows, and impacts on benthic flora and fauna.

Yet approval has already been given to dump additional spoil in the marine park waters further adding to pollutants and putting at risk seagrass meadows and other aspects of the benthic communities. The distance that plumes of fine sediments will undoubtedly travel has been modeled but what will occur in reality? The dilemma Wildlife Queensland has is who to believe. The highly respected Prof. Russell Reichelt has come out in defense of the decision to approve dumping of dredging spoil in the marine park waters while other respected scientists have offered opposing views. Increased ports will result in increased shipping – a 100% increase to the current 3500 annual bulk carrier movements is estimated – and ships are becoming larger. This is another potential major threat, and accidents have occurred as recent history reveals.

Finally there is a plethora of both Commonwealth and State legislation addressing management of the Great Barrier Reef. Such legislation includes, but is not limited to, responsibilities under the World Heritage properties agreements, dredging and spoil dumping in marine parks, and marine park management. One would imagine that with such an abundance of legislation the management of marine parks would not be a concern.

However, the Queensland Government has been watering down environmental protection and fast tracking approvals for ports and LNG plants along the Queensland coastline. The Queensland Government appears to be hell-bent on supporting industrialisation and shipping out the state’s coal regardless of the impacts on Queensland’s environment and significant global climate change. The Commonwealth Government’s attitude appears to be less than responsible with its intention to devolve its responsibility for national matters of environmental significance under the EPBC Act to the states and territories.

The Great Barrier Reef is a listed World Heritage Area and should be subject to best management practices; if in doubt about the appropriateness of an activity the Precautionary Principle should come into play. Many current activities and approved activities yet to be implemented within or adjacent to the Great Barrier Reef have significant influence on the health of the marine park, its ecosystems and the wildlife they support.  It is timely that UNESCO has called the management of this world icon into question.

The questions to be answered in the hope that the Great Barrier Reef will be in existence for our children’s children to enjoy are:

It is timely that a classic of ecological literature, Judith Wright’s The Coral Battleground, has been recently re-published by Spinifex Press. As stated by Germaine Greer on the cover of the new edition, “It will come as a surprise to most people that so many of the issues confronted in the 1960s by the doughty campaigners against drilling for oil on the Barrier Reef are still alive. We will have to be as determined and as persistent as they were if we are to protect what is now a World Heritage Site from pollution, dredging, dumping, coral bleaching and pest species.”