Help in hand for the bridled nailtail – March 2015 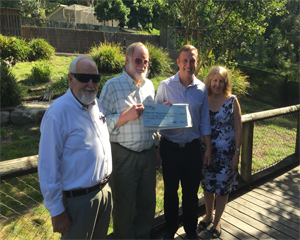 There were smiles all ’round on Tuesday 10 March as Wildlife

Smiles all ’round as WPSQ presents funds raised by its recent appeal for the bridled nailtail wallaby at David Fleay Wildlife Park, Gold Coast – Photo © Department of National Parks, Sport and Racing

Queensland President Peter Ogilvie, Secretary Des Boyland and Councillor Lynn Ogden met with Hon Dr. Steven Miles, Minister for Environment and Heritage Protection, Minister for National Parks and the Great Barrier Reef, and senior ministerial and National Parks staff including the Director General of National Parks, Sport and Racing to present a cheque, the product of the Society’s recent fundraising campaign for the bridled nailtail wallaby.

David Fleay Wildlife Park (Fleay’s), a fitting venue for the meeting, was established by the late Dr David Fleay, one of the founders of Wildlife Queensland in 1962. Furthermore, the park is home to a captive breeding program for the bridled nailtail, beneficiary species of the funds.

With the cheque presented, proceeds will now be available in Central Queensland where work will commence on predator control at Taunton National Park and dietary studies to enhance conservation of the endangered wallabies.

Fleay’s also provided the opportunity to get up close and personal with the focus species of Wildlife Queensland’s current appeal, Bridging the Gap, for the endangered mahogany glider. This promising look forward was balanced by the chance to look back and view some of the positive results of an earlier appeal, the 1000 Vines Project for the Richmond birdwing butterfly. Fleay’s was one of several sites where the host vine essential to the butterfly’s survival was planted as part of the project. It was exciting and rewarding to be advised that a large female birdwing butterfly had been sighted at Fleay’s only recently – a success story in progress.

National Parks staff are eager to establish a closer working relationship with Wildlife Queensland. They are of the view that together we can help enhance our environment for the benefit of our wildlife. While the memorandum of understanding underpinning Friends of Taunton already exists between the two parties, Wildlife Queensland welcomes this approach for a more cooperative effort. And why not – our wildlife will be the beneficiary!