Have you seen the world’s only aquatic monotreme?

Keep an eye out for Australia’s strangest mammal during #platypusmonth

August is platypus month, an initiative embraced by Wildlife Queensland’s PlatypusWatch program. Despite almost everyone knowing about the biological curiosity that is the world’s one and only living platypus species, many Queenslanders haven’t seen this elusive egg-laying mammal in the wild.

The scarcity of wild platypus observations can partly be attributed to this monotreme’s secretive, crepuscular lifestyle. Platypuses are most active at dusk and dawn, so they often go overlooked. However, reduced sightings may also signify that this once-common aquatic mammal is struggling for survival.

Platypuses (Ornithorhynchus anatinus) inhabit creeks and rivers from Tasmania and along the east coast of Victoria, New South Wales and Queensland, as far north as Cooktown. Once so common that they were hunted for their thick, water-repellent pelts, platypuses are now listed as Near Threatened on the IUCN Red List.

Not only do their numbers appear to be in decline, but the platypus’s nationwide range has also contracted by as much as 30% over the past thirty years. Despite these alarming figures, and despite Wildlife Queensland’s calls for a review of this monotreme’s conservation status, the species is not listed as being at risk under Australia’s Environmental Protection and Biodiversity Act 1999 (EPBC Act) and is listed only as Least Concern here in Queensland.

That’s why Wildlife Queensland’s PlatypusWatch is asking wildlife watchers and members of the public to report all platypus sightings across the state, this month and all year round, using our simple online form. Every sighting helps researchers gauge how platypus populations are actually faring so they can advocate for more robust conservation measures for platypuses.

Where to find platypuses

‘We have had some good sightings coming in from Moreton Bay and Pine Rivers, as well as from the Mary River catchment region, but we would like to see more sightings around the Brisbane region,’ says Tamielle Brunt, PlatypusWatch Project Officer.

‘If we can get a better idea of exactly where platypuses live, we can better inform management decisions to protect this elusive species,’ explains Brunt, who is gathering an impressive Instagram following under the name @platypus_protector.

‘These are iconic, one-of-a-kind Australian monotremes, so we really need all Aussies to be more involved in protecting them. We also monitor populations using eDNA sampling method to determine the presence or absence of platypuses in waterways.’

Environmental DNA (eDNA) testing samples the water for traces of nuclear or mitochondrial DNA shed by platypuses as they go about their daily activities. As part of a grant funded by the Queensland Government’s Queensland Citizen Science Grants, Brunt and her team have been teaching locals in Queensland’s Upper Dawson region, near Taroom and Theodore, how to test local rivers and tributaries, with excellent results.

‘Alarmingly, some of our eDNA studies in Brisbane waterways have shown negative results for platypus DNA in habitats where platypuses have traditionally been seen,’ Brunt says. ‘Platypuses are being impacted by environmental changes, so we need to find out where they are vulnerable to take action before it is too late.’

Threatening processes that contribute to declining platypus numbers include:

You can also view PlatypusWatch’s excellent webinar Protecting the Platypus online to learn more about the challenges these incredible animals face.

How to Spot a Platypus

One thing that strikes people who do see platypuses in the wild is that they are smaller than people think, especially here on the mainland. Males average 50 cm in length and weigh about 1.5 kg. Females are a little smaller, at around 40 cm and 1 kg in weight.

Given the platypus’s odd appearance, with its bill, webbed feet, and thick tail that stores fat for energy, you might think they would be difficult to confuse with any other species. However, in poor lighting or from a distance, musk dusks and rakali (Australia’s aquatic otter equivalent) are sometimes confused for platypuses.

Is it a Platypus?

What Happens to My Sighting Data? 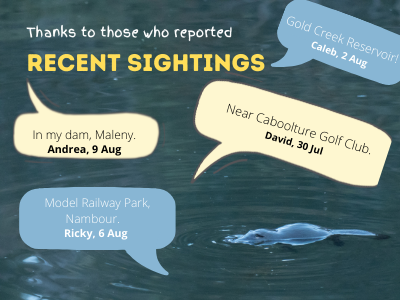 Observing a platypus going about its business of foraging, or even just having a little float on the water’s surface, is a magical experience, as our recent citizen science volunteers for Wildlife Queensland’s Upper Dawson branch found when they spotted platypuses in Castle Creek, near Theodore.

Every PlatypusWatch sighting we receive gets entered into a database that is used for genuine conservation purposes. Sharing your platypus sightings won’t cause issues for platypuses because we don’t publish exact GPS locations of sightings or the full names of those who report them.

You might like to support platypus research and conservation by symbolically ‘adopting’ a platypus for one year. Your symbolic adoption will be used to fund on-ground conservation projects, such as eDNA sampling and state-wide campaigns that help conserve platypus populations.

Those who adopt receive a:

So, please, get involved this #platypusmonth. Join PlatypusWatch Network and take a riverside stroll or an amble by your local creek this August, keeping your eyes primed for the tell-tale ripple of these little Aussie rippers.